Challenge: Efficiently obtain a vertical seismic profile (VSP) in a deep vertical and well in the Reconcavo Basin.

Results: Acquired complete zero-offset VSP without any additional rig time with the data quality confirmed by a good match to the synthetic seismogram and well-tie analysis.

Great Oil Perfuraçoes Brasil Ltda. wanted to obtain time vs. depth and velocity information for a vertical openhole land well in the Reconcavo Basin with a maximum deviation of 4°. At the time of logging, this exploration well was the deepest in the basin. However, executing the seismic program with a conventional borehole seismic imager tool would require two descents (intermediate and final depth) owing to constraints posed by the well’s construction. The two seismic logging runs would have a significant adverse effect on overall rig time. 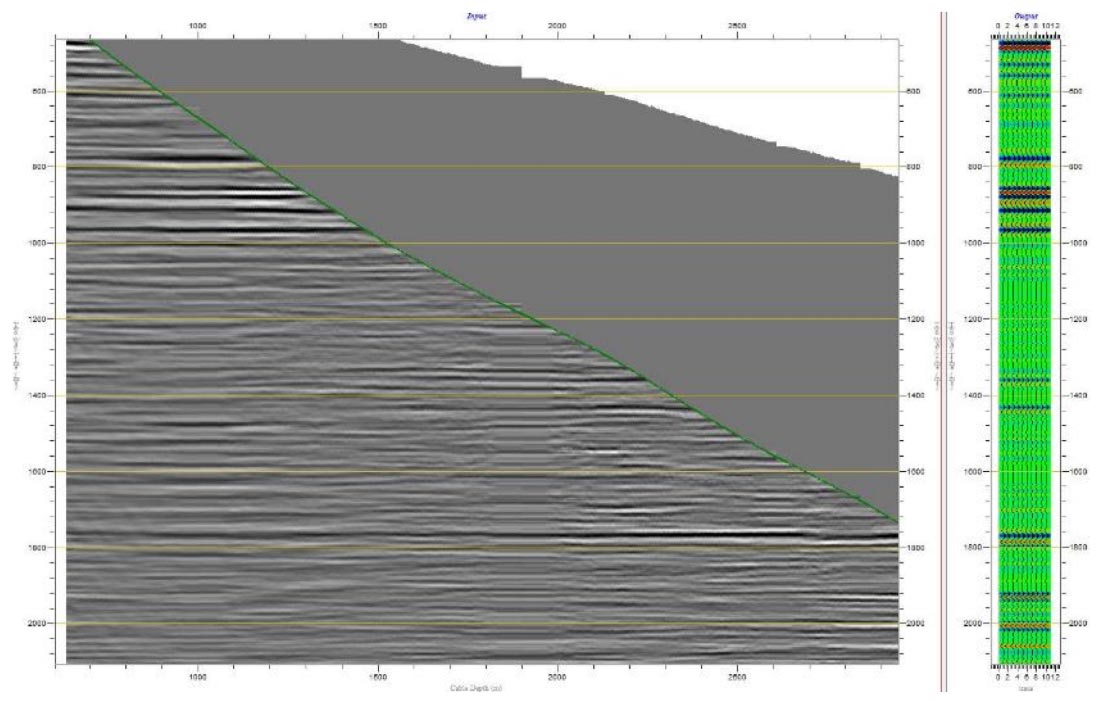 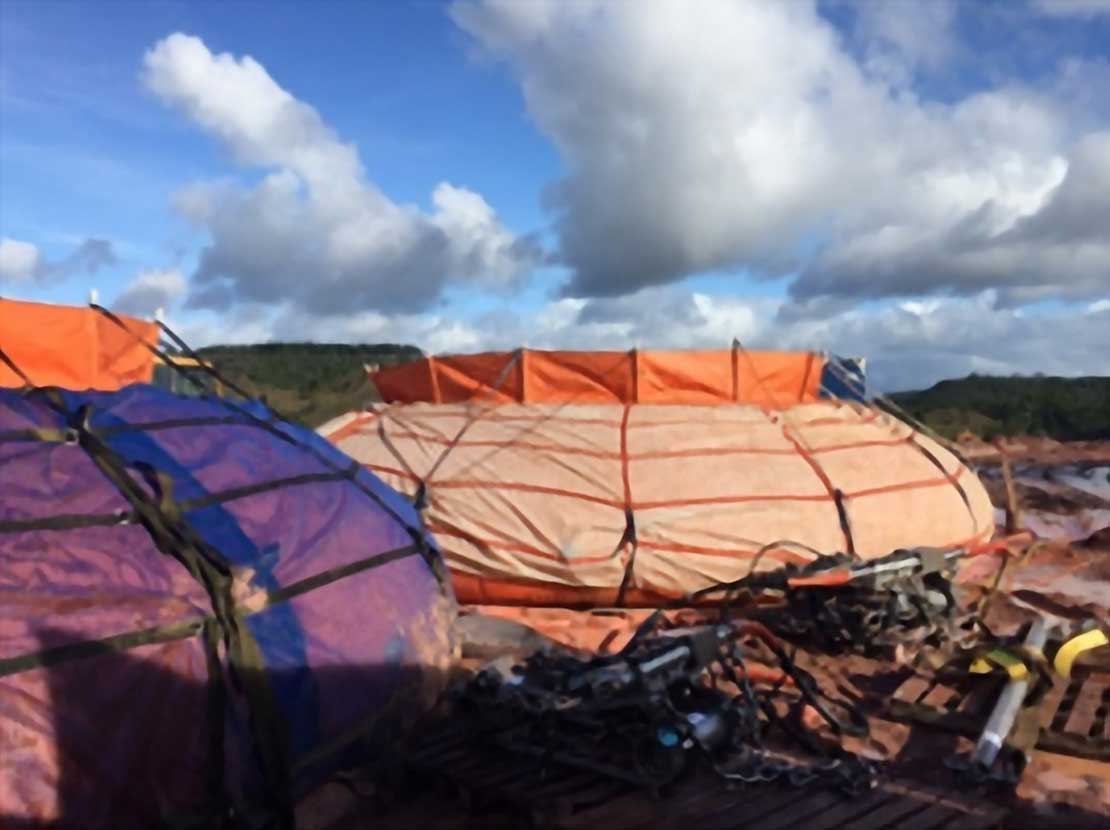 The dual-PAT setup featured a total volume of 600 in3. Alongside the PATs is the TRISOR* acoustic source control system used to autotune the gun cluster with the hDVS system to automatically initiate hDVS acquisition upon receiving the time-break signal from the TRISOR system.

VSP acquisition with high spatial sampling in the same operational time as a checkshot: 10 minutes

Instead of deploying a conventional borehole seismic tool, Schlumberger proposed using the hDVS distributed acoustic sensing (DAS) system to avoid the 15 hours that would be required for the dedicated logging runs. The system’s optical interrogator unit at surface would be connected to the optical fiber of the hybrid wireline heptacable to collect seismic data along the entire length of the cable used to convey other wireline tools.

No time is required for rigging up and down and conducting a separate seismic tool deployment; the seismic survey is acquired when the cable is stationary during the normal operation sequence of the other logging services, such as pressure measurement and fluid sampling stations, coring points, calibration of nuclear magnetic resonance (NMR) tools, and plug setting. Whether the objective of the survey is first-time arrivals for basic velocity calculation and sonic corrections (checkshot) or full waveforms to extract a reflectivity series for well-tie analysis (VSP), the acquisition time is essentially the same: minimal.

Dual portable airgun tanks (PATs) were used for this operation to facilitate the deployment of airguns for a land operation. Excellent hDVS data can be efficiently acquired with the full range of Schlumberger seismic sources, including airguns and vibroseis units.

The Great Oil logging program consisted of two runs: one for basic petrophysical logging with a quad-combo comprising resistivity, density, porosity, and sonic and a second run for NMR and pressure measurement. VSP survey was acquired with hDVS during both descents, earning the moniker penta-combo for the combination of a quad-combo and seismic measurement.

Data from the first logging run was of excellent quality up to 2,600 m, at which point there were fewer shots in the stack because stationary time was minimized for this run. Adding a third PAT to the cluster would have resolved this effect but was not an available option at the time. adding an additional PAT to the cluster.

The second logging run of an NMR tool and the MDT modular formation dynamics tester provided the ideal configuration to use the hDVS system for acquiring borehole seismic data simultaneously with the 10-minute stationary calibration periods for the NMR tool or at MDT tester stations for pressure measurement. 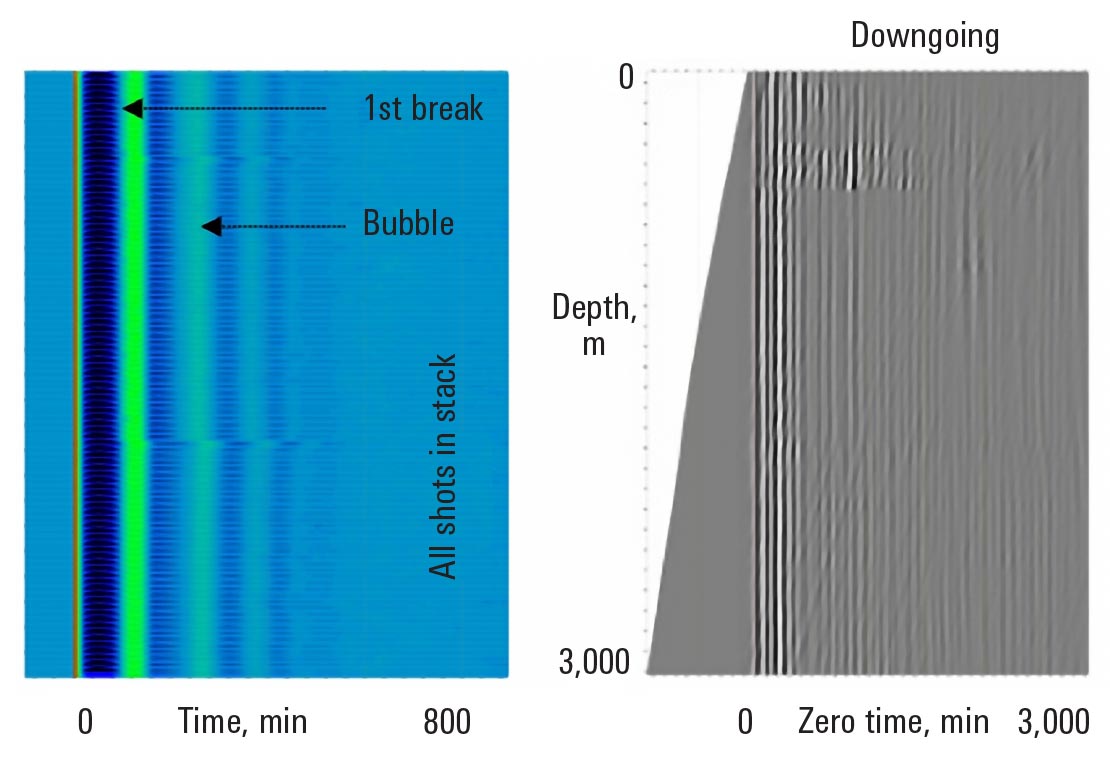 Left: The near-field airgun source signature of all the shots fired during the job (totaling more than 165 shots, including testing) shows excellent synchronization, stable bubble, and constant amplitude. Right: The downgoing wavefield recorded by hDVS on optical fiber shows clear first-time arrivals across the entire wellbore.

Significantly improve the efficiency of borehole seismic operations while lowering the cost.