Solution:  Use QUANTUM PERFPAC single-trip perforating and frac-packing system to reduce completion time and minimize fluid loss to the formation.

In a deepwater field offshore Nigeria, with water depths ranging from 3,000 to 3,500 ft, the operator had developed the field in two phases. During the first phase of the project, many of the wellsboth injector and producer–were completed using conventional frac-packing systems. Because of the highly permeable sands in the field, postperforation fluid loss was often high in the wells in which a conventional two-trip frac-packing system was used. Fluid loss pills had to be pumped to control the losses before the frac-packing completion was installed. Acids used to dissolve the pills had not been effective and had led to formation damage and lower injectivity and productivity.

Because rig space was limited and rig time was costly in the deepwater completions, the operator wanted to address both. In addition, eliminating the need for fluid loss pills would improve well performance and save rig time and material costs. 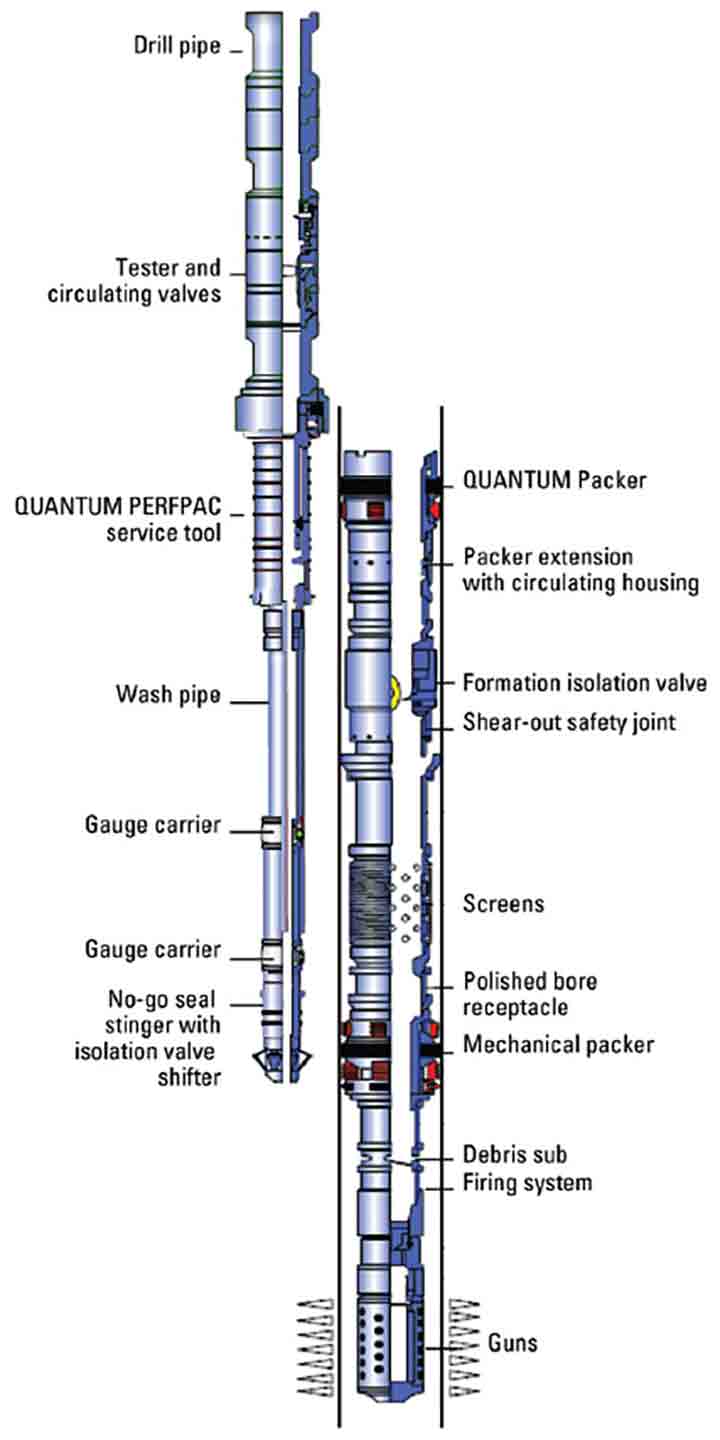 After depth correlation, the mechanical perforating packer was set, and the guns were fired. The wellbore fluid was then displaced with completion brine, and the testing tool valves were opened to allow communication with the formation. The packer was then unset, and the screens were positioned across the perforations with the mechanical packer below the perforated zone serving as the sump packer. A successful frac-pack treatment followed.

Minimal space was occupied on the rig by using a purpose-built stimulation vessel. A continuous-mixing system ensured that the fracturing fluid did not need to be batch-mixed in advance, eliminating waste and reducing the cost of the treatment.

Savings of more than USD 1.5 million

Use of the QUANTUM PERFPAC single-trip system eliminated the need to pull out the guns and make a second trip for frac packing. As a result, 1.5 days of rig time was saved, compared with the best time for the two-trip system on nearby wells.

The system also reduced formation exposure time between perforating and frac packing. This shorter exposure time helped reduce completion fluid losses by more than 1,000 bbl and saved an estimated USD 70,000 in material costs and the additional rig time that would have been spent pumping a fluid loss control pill. Moreover, eliminating the need for this postperforation pill reduced formation damage enhanced injectivity because of reduced skin at the sandface. The overall savings for the operator amounted to about USD 1.5 million.

Save rig time with a single-trip sand control solution for single- and multizone completions.

Combine a tester valve and a circulating valve that can be cycled independently or in sequence.