Challenge: Characterize the depositional facies, distribution, and geometry of a thin-layered sandstone reservoir with horizontal and vertical heterogeneity to better understand the origin of the current low reservoir production.

Results: Significantly improved the well planning process by incorporating the distribution and geometry of the reservoir facies within the modeled subtidal channel system.

Burapetco is an E&P joint-venture company operating in the Burg El Arab and Abu Sennan fields of the Alamien basin in the north Western Desert of Egypt. One of the hydrocarbon reservoirs Burapetco focuses on is the Cenomanian Bahariya Formation, which is composed of clastic (sandstone and shale) and nonclastic (carbonate) deposits with an increase of the carbonate facies toward the north.

To better understand the low production from the thin-layered Bahariya sandstone reservoir, Burapetco planned to conduct a study with the following sequential objectives: identify the lithofacies, sedimentological characteristics, and depositional environment to characterize the thin-layered sandstone reservoir and then use this information to build a 3D static model of it. Although the available seismic data was of poor resolution, three wells had been logged with the FMI fullbore formation microimager, which provided high-resolution image and dip data. 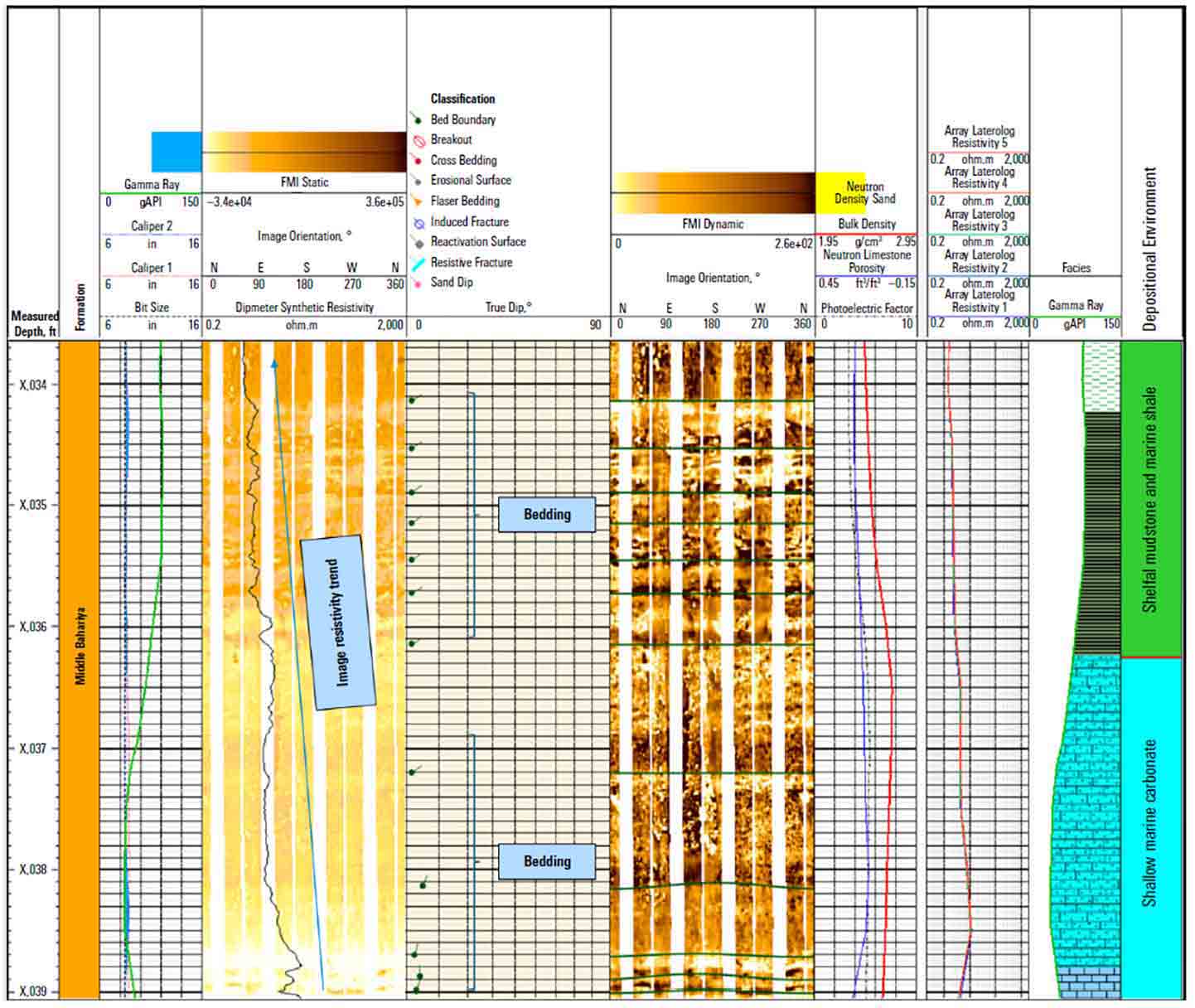 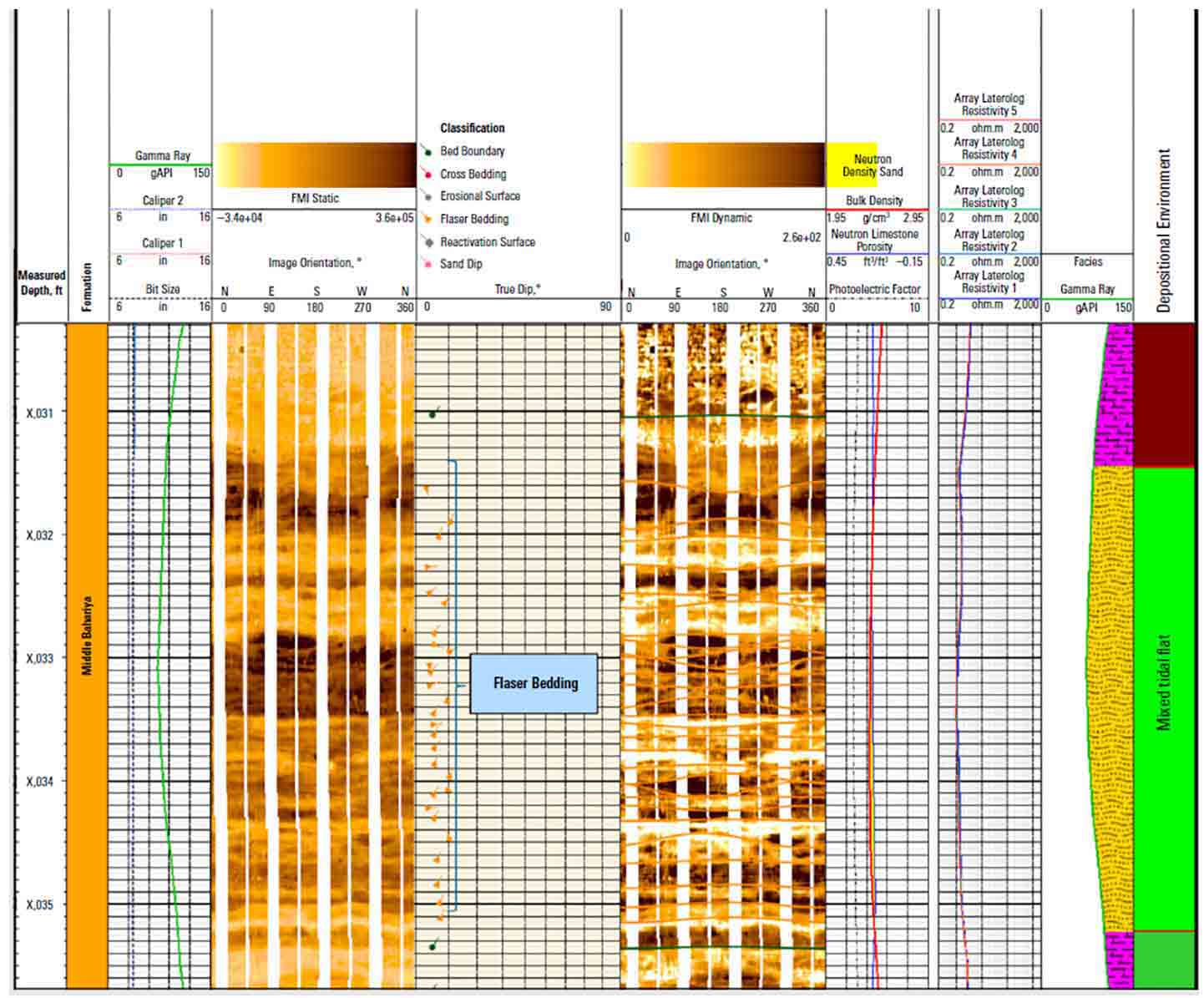 Schlumberger proposed a collaborative workflow using both the Techlog wellbore software platform and Petrel E&P software platform with the support of the Schlumberger experts from Data Services. The workflow began with well interpretation of static and dynamic images obtained by the FMI fullbore formation microimager. The FMI microimager provided 0.2-in image resolution in both the vertical and azimuthal directions to give greater insight into both sedimentary and structural features. Manual dip picking was performed to extract dips for bed boundaries, sands, crossbeds, and erosional surfaces and to conduct statistical analysis and characterization of lithofacies, facies associations, and sedimentology. The resulting interpretation of the depositional environment for the top 100 ft of the Middle Bahariya sequence in each of three wells was then used to correlate the wells for constructing a 3D static model using an object-based statistical method.

The first stage of the collaborative workflow was performed to identify the sedimentological and structural characteristics in each well by using the high-resolution imaging data from the FMI microimager.

The interpreted data for each well indicate a very low magnitude for the structural dip in all three wells, with an azimuth trend toward the northeast for Wells X-2 and X-3 (dip <5°) but toward the north northwest for Well X-1 (slightly higher dip range up to <7°). The sand dips show a similar dip pattern, with the crossbed dip magnitudes in a median range of 14°—16° and multiple azimuth trends dominantly toward the east-northeast and south at Well X-3, west-southwest at Well X-1, and north, northwest, and southeast at Well X-2. 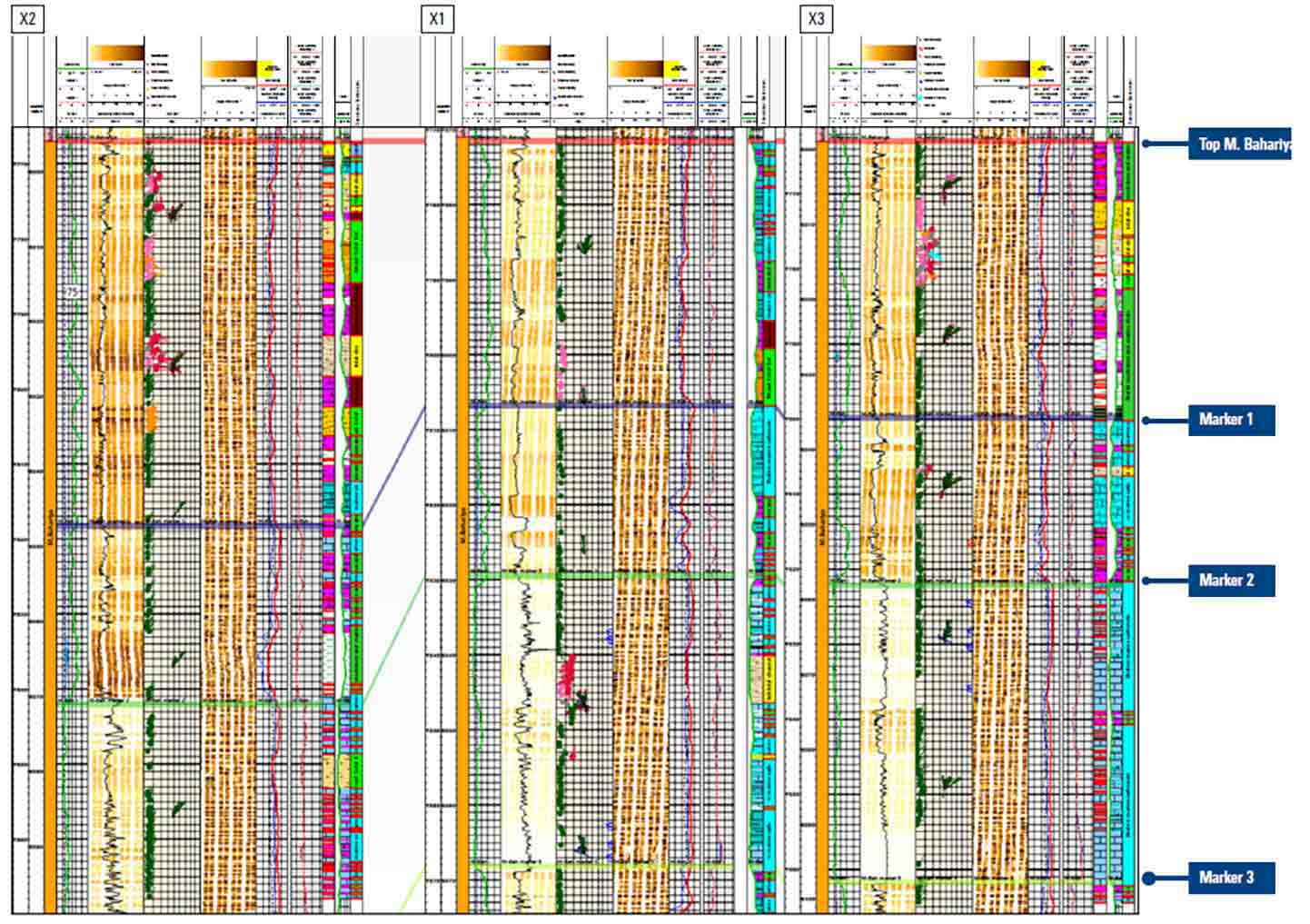 Correlation of well logs and interpreted images flattened on the top of the Middle Bahariya Formation shows the multiple scales of data to be incorporated in the model.

The interpreted facies associations and environments from the FMI microimager data are mostly shallow marine carbonate and shelf shales in the lower part of the interpreted interval, whereas the upper part includes more clastic contributions, mostly as crossbedded sandstones in subtidal channels and flaser-bedded tidal flat sandstones. All crossbedding was identified within the subtidal channel depositional environment. All sandstones have mud clasts and finer materials that could have a negative impact on reservoir production.

Correlation of the interpretation of the high-resolution FMI microimager data for each well led to the conclusion that the depositional regime controls the lateral facies variation with only very low structural impact.

Sedimentological investigation recognized subtidal channels in the upper zone of the interpreted interval at Wells X-2 and X-3, but the only subtidal channel in Well X-1 is in the lower zone. The thickness and discontinuity indicate the presence of multiple subtidal channels. The subtidal channels have high sinuosity, as indicated by a crossbedding paleocurrent analysis, and are located in tidal flat and shallow marine shales and carbonates.

In recognition that data at multiple scales can pose integration challenges, Schlumberger and Burapetco worked together to apply a quick and straightforward object-based approach for data integration. Object-based statistical methods applied in the Petrel E&P software platform are well-suited stochastic procedures for generating channel models for the subtidal channels interpreted from the FMI microimager data. An object model is defined first for reproducing given channel shapes and then a distribution process is implemented for generating several channel objects that account for the available data.

The detailed analysis and interpretation of the FMI microimager data are highly useful for stochastic modeling because the identified channel bodies provide an initial indication of the tidal body shapes that the object-based process has to reproduce. Incorporating the interpreted channel parts in the simulation also guides simulation of the nonvisible parts of the channels.

The direct distribution process aims at simulating channels that directly fit the well data. Three intermediate steps are required before simulating the channel body. Each stochastic data-processing step corresponds to a stage of the geological analysis of the reservoir data.

The first step generates up to several sets of three channel cross sections in intervals where the channel facies have been interpreted. The created sections satisfy input parameters for their size (i.e., width and thickness), direction, and stacking, which is the vertical and horizontal overlap ratio. 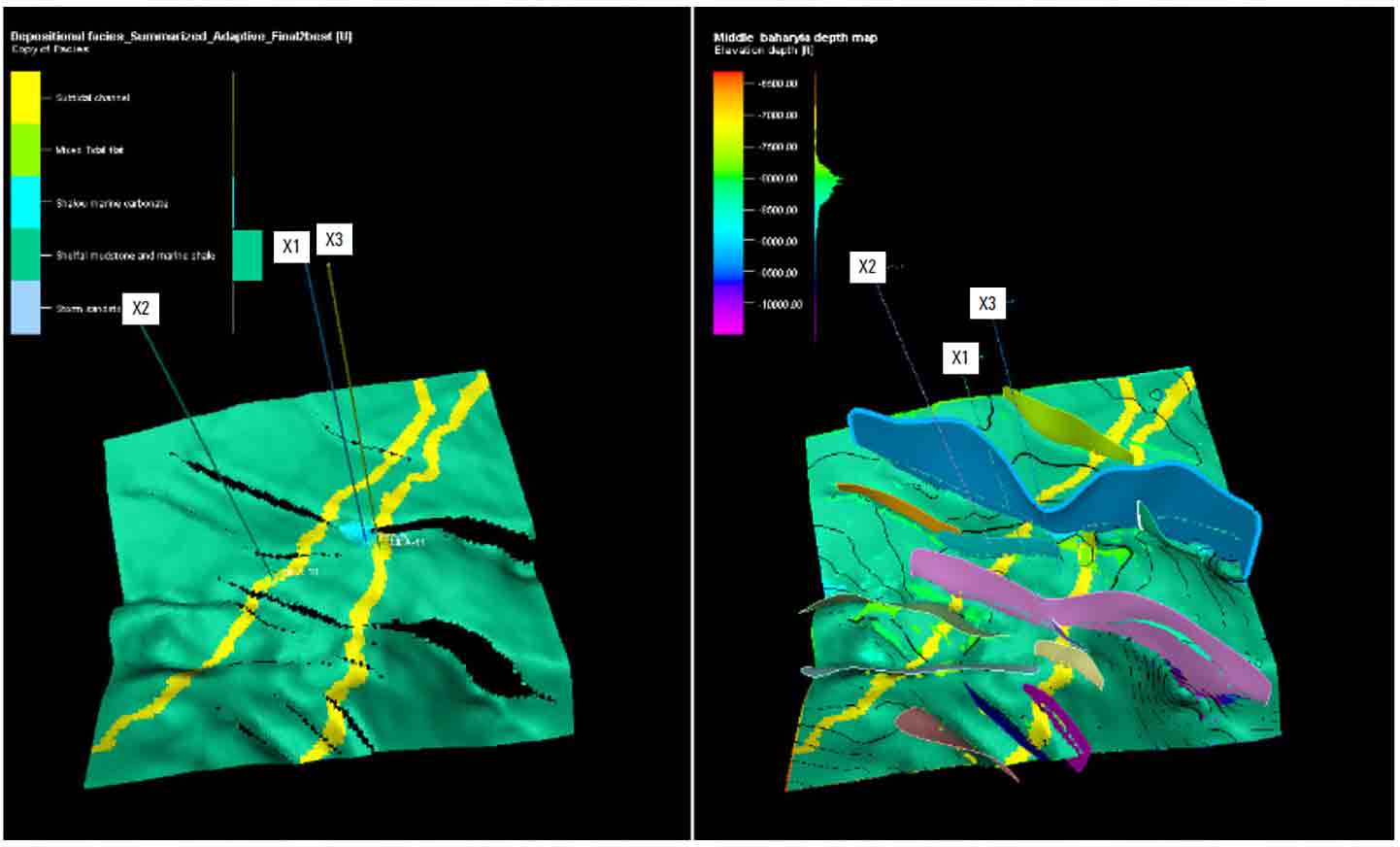 3D facies distribution using the object-based modeling algorithm integrates data at multiple scales to map the distribution and geometry of the reservoir facies in the subtidal channel system.

The second step correlates the channel cross sections across the 3D space to determine which cross sections are contained within the same channel. Decision making depends on several criteria, such as slope, direction, and distance between data, and a random factor to guarantee the stochasticity. A second goal is to provide geologically consistent vertical stacking of the channels. To control the stacking through the reservoir volume, surfaces are generated to contain the top of the simulated channel.

The third step builds a domain within each generated surface to initially define the sinuosity of the channel and the amplitude of its bends. Data points are collected from intersections computed between the channel-belt domain and the well intervals belonging to the background facies. The collected data points represent repulsive points through which the channel must not pass. The repulsive background points are then used to compute virtual points to help the generated channel avoid the repulsive points.

Once these three steps are completed, channel body simulation is performed within a 2D parametric space associated with the channel-belt domain. Two simulations are involved: Stereonet parameters are simulated to define a backbone along which cross-section width and thickness values are simulated. Both simulations are conditioned by the origins of the channel sections and the virtual data points. The resulting constructed channel bodies fit the channel facies data from the well intervals and also account for the geological parameters of dimensions, slope, direction, and sinuosity.

By identifying the distribution and connection of the subtidal channel facies, Burapetco was able to improve the success of its well planning operations. Burapetco requested that Schlumberger acquire additional images and dipmeter data to continue application of the collaborative workflow for structural and facies analysis and modeling using the Techlog and Petrel platforms with the object-based method.

”An integrated workflow in Petrel breaks down the traditional barriers between the geoscientists. Collectively they can bring all their knowledge together to make better-informed decisions.”