Whiting Petroleum Corporation, one of the largest operators in the Williston basin, needed to stimulate a well drilled in the Pronghorn Formation with an uncemented interval in the heel section. A TuffTRAC cased hole services tractor was run in hole, and the ultrasonic log results confirmed good cement isolation below 18,650 ft [5,685 m], moderate isolation with some microdebonded cement between 12,900 and 18,650 ft [3,932 and 5,685 m], and partially fingered to almost no cement isolation between 12,900 ft [3,932 m] and the liner top. Simultaneously, casing thickness was directly measured so that an accurate liner burst pressure casing rating could be determined joint by joint across the lateral.

A 1,822-ft [555.3-m] section was treated with 14 fracturing stages, and 12 BroadBand Sequence service composite pills were applied from stage 34 to stage 47. A bridge plug was placed in the middle of this interval to create two 911-ft [277.7-m] intervals to improve performance. The composite pills were pumped between fracturing stages to temporarily isolate previously stimulated entry points.

Stimulation of the 1,822-ft [555.3-m] interval was completed in 14 hours. Initial shut-in pressure (ISIP) measurements captured at the end of each stage showed progressive increases. A total gain in ISIP of 1,376 psi [9.5 MPa] with a maximum fracturing gradient of 0.967 psi/ft was recorded.

The initial 9,025 ft [2,750.8 m] of lateral were previously stimulated as per the original completion plan with 33 additional plug-and-perf stages and without use of BroadBand Sequence service. The maximum fracturing gradient measured for this section of the lateral was 0.943 psi/ft.

The Flow Scanner system was used during six passes to accurately quantify oil, water, and gas holdup across the lateral. The well was flowing at approximately 512 bbl of oil per day, 1,061 bbl of water per day, and 971 Mcf/d during logging.

Stages 34–47 were analyzed as a single producing interval as there was no hydraulic isolation (little to no cement), allowing production to move in and out of the wellbore based on trajectory. This lost hydraulic isolation presented itself as decreasing spinner response due to an increasing flow area (fingered cement) behind pipe. Qualitative indications of production were observed over this interval (temperature, spinners) to support production behind pipe at most of the Broadband Sequence service perforations. All production from this interval was forced back into the liner at the top perforation (stage 47).

The Flow Scanner system’s production logging showed that 42% of total oil production was coming from the section where BroadBand Sequence service was pumped, which represents only 17% of the lateral length. These encouraging results demonstrate the value of the BroadBand Sequence service as a key enabler for challenging well stimulation operations. 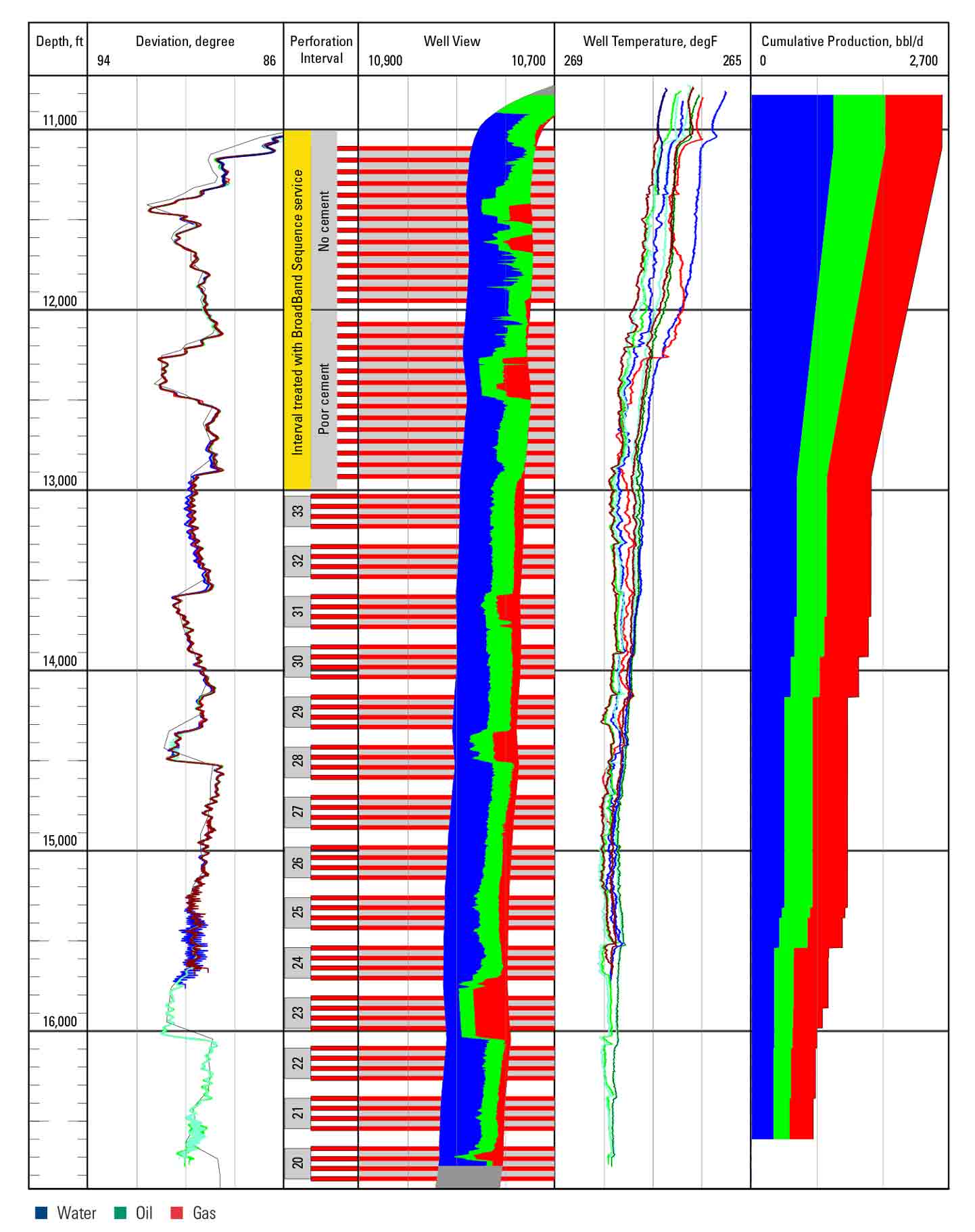 Log while drilling with a short, modular tractor and the only system with reverse tractoring and traction control.