Challenge: Ensure all stages of a multistage offshore well are stimulated as designed to avoid having unstimulated or understimulated zones that don’t contribute to production.

An operator in the North Sea completes new multistage wells with third-party ball-actuated sliding sleeves. In theory, the sleeves improve operational efficiency during stimulation: At the end of a stimulation treatment, engineers drop a ball that seats in the next sleeve, simultaneously isolating the prior zone and opening the new one. Engineers verify actuation by identifying a spike in the treating pressure.

However, reservoir pressure response, fluid rate and density changes, and other phenomena can hide actuation failures, such as ball pass-through (because the wrong ball was dropped), ball damage, or incomplete seating. If the ball does not actuate the sleeve, or if the ball breaks or falls off the sleeve during stimulation, the fluids intended for the new stage instead flow into the previous stage, leading to overstimulation of that stage and understimulation (or no stimulation) of the intended target stage. An unstimulated zone may not contribute to production for years until the well is a candidate for restimulation.

In fact, posttreatment analysis of prior well stimulation operations indicated that isolation failures were common for the operator’s acid fracturing treatments. To optimize production, the North Sea operator wanted to verify that each stimulation treatment was reaching its intended reservoir segment. Conventional technology such as distributed temperature sensing and coiled tubing monitoring was not practical for technical, logistical, and economic reasons. Instead, the operator needed a simple, noninvasive method. 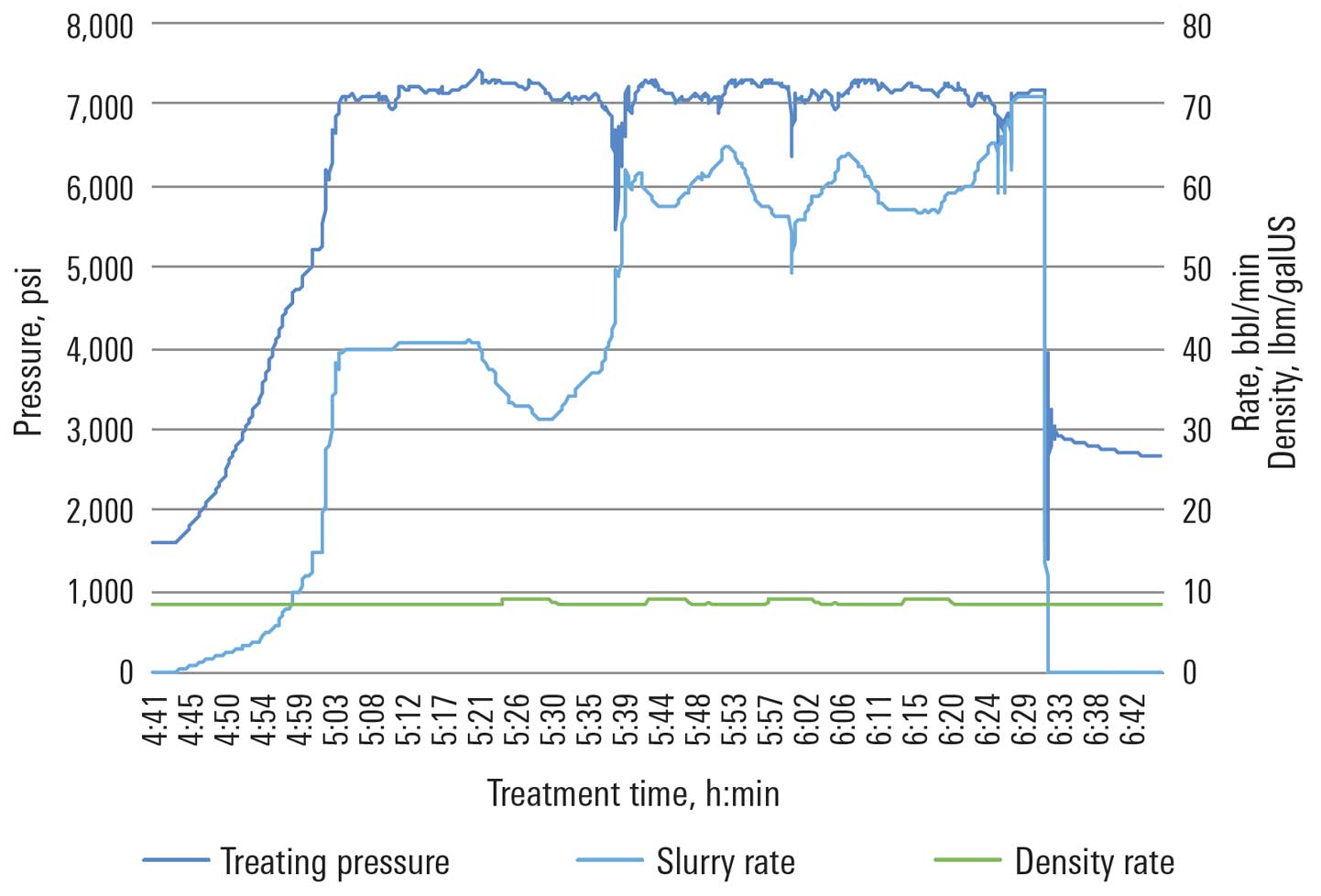 An injection test indicated the Zone 3 sleeves were closed and the Zone 4 sleeves open. Therefore, the stimulation treatment was pumped as designed. 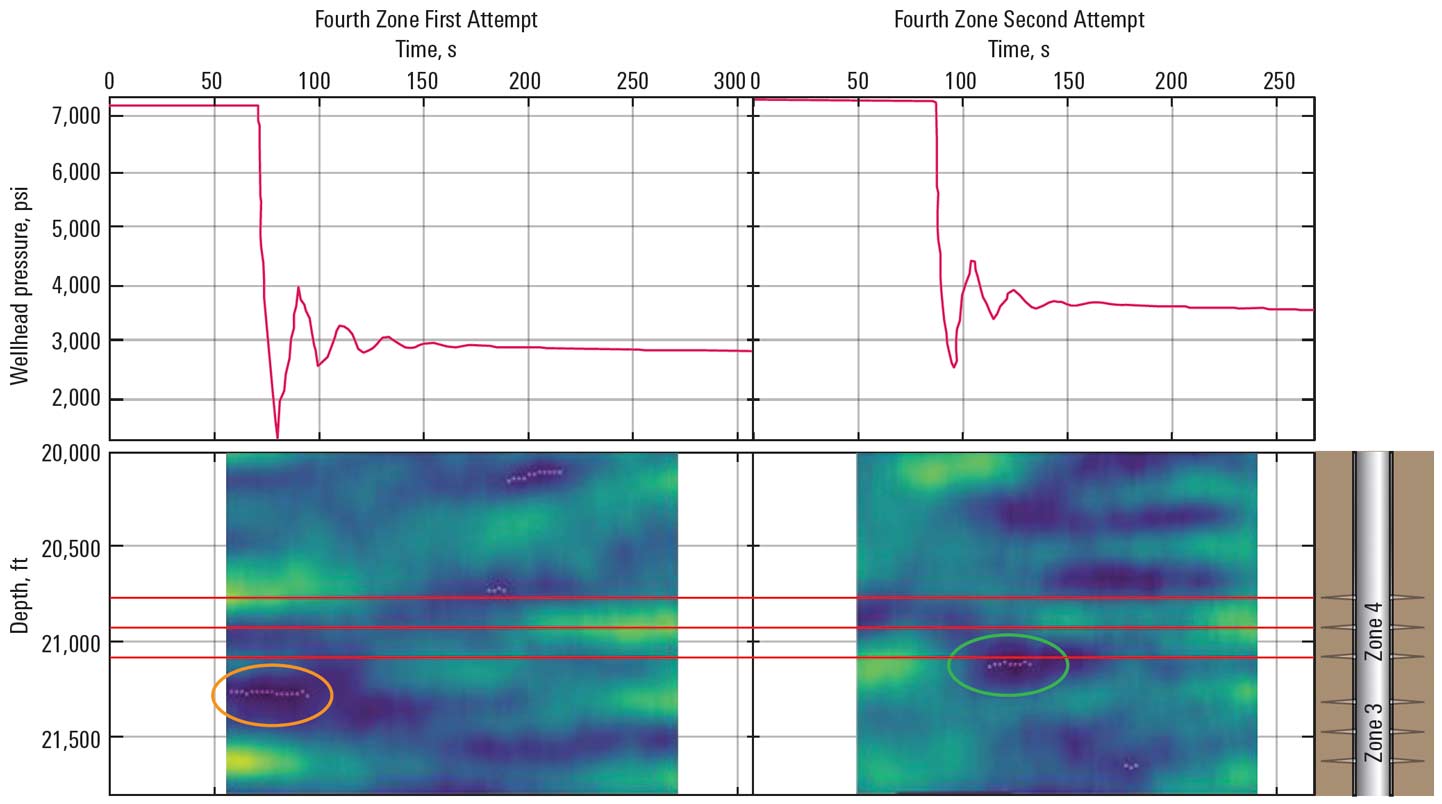 After the stimulation operation, WellWatcher Stim service analysis determined that the treatment had entered the prior zone’s top sleeve (orange oval), indicating the isolation ball broke or became unseated during the job. After a second ball was dropped, stimulation fluid entered one of the targeted sleeves (green oval).

Schlumberger proposed the WellWatcher Stim service to monitor the stimulation operation in nearly real time. With minimal setup time and location footprint, the economical service can verify events such as fluid injection point and fluid diversion. The service improves overall stimulation efficiency and can provide insights leading to improvements in perforation, completion, or stimulation strategies.

To enable the service, the treatment team temporarily installs a high-frequency pressure transducer on the wellhead for analysis through an acquisition system on the stimulation vessel. During the stimulation operation, engineers use a proprietary algorithm to analyze the data for high-resolution pressure variations and transient events. For more details about the technology and its application, see SPE-182451.

For this well, the service could be used to determine, from an instantaneous shut-in event, the fluid injection point, which would indicate sleeve and ball isolation efficiency.

The operator agreed to use the technology during a multistage stimulation treatment of a chalk formation in the North Sea. For the first three stages, analysis of the treating pressure response and WellWatcher Stim service confirmed that the sleeves performed as expected and stimulation fluids entered the intended zones as designed.

For the fourth stage, the treating pressure response was ambiguous but injection tests indicated that fluid was entering the intended sleeve, so the stimulation treatment was pumped.

However, subsequent WellWatcher Stim service analysis determined from the shut-in pressure response that the treatment had entered the same reservoir section as the prior stage, indicating incomplete isolation—most likely the result of a ball breaking or unseating after the injection test.

The operator decided to drop a second actuation ball to try to improve the isolation. For this second ball, the treating pressure response was more pronounced, suggesting more complete isolation. The stimulation treatment was repeated. The final treating pressure and WellWatcher Stim service data agreed that the stimulation treatment reached the intended zone.

Furthermore, the service showed that most, if not all, of the stimulation fluid was entering only one of the three sleeves in the zone. The same phenomenon was seen in other zones as well because the bullheaded treatments are not designed with any diversion technology to help distribute the fluid when formation permeability varies.

As a result, the operator is scheduled to monitor a future well during an OpenPath Sequence diversion stimulation service designed to distribute fluid to contact the formation behind all of the sleeves in each zone.