The next step into HP/HT pressure control will require 30,000-psi BOPs and control equipment

In an industry edging into higher temperature and higher pressure environments, the approach taken to equipment design and qualification can have considerable consequences. In the case of one operator and Cameron, it not only has taken the industry further into the ultra-HP/HT environment, it has immersed the industry in addressing such key challenges as material properties, sealing mechanisms and pressure control. And, due to the industry need for ultra-HP/HT standards, the initiative has supported development of API 1PER15k-1 and API 17TR8 documents. 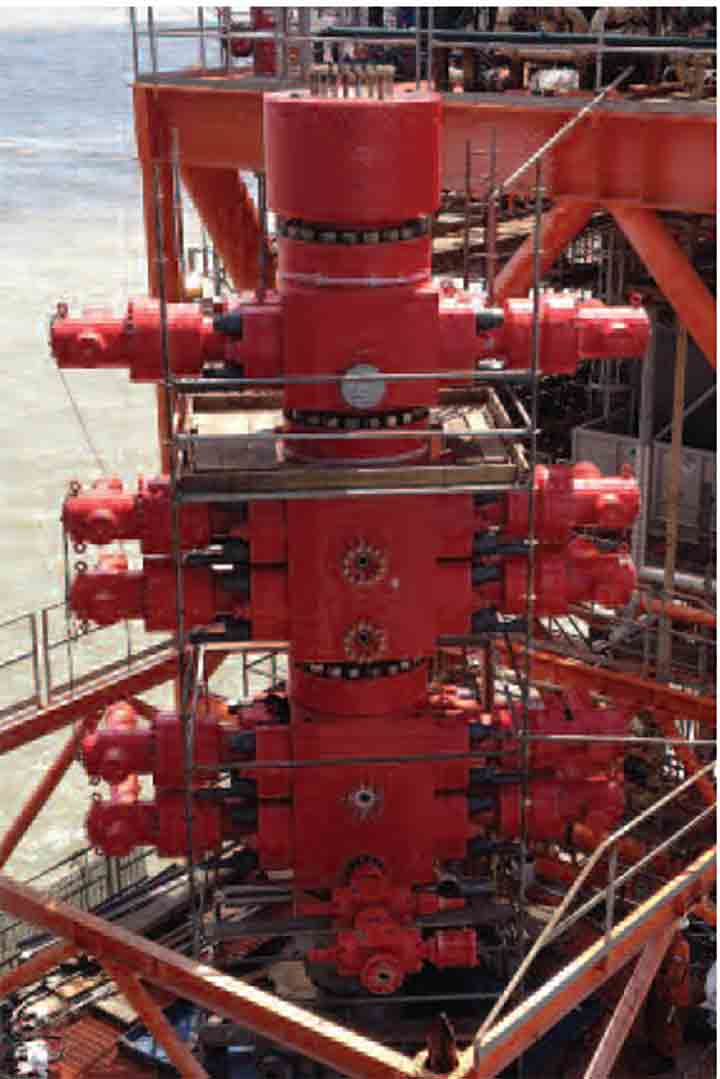 Difficulties that must be overcome

When looking to identify the effects of high pressure, no defined API specifications exist for any-thing above 20,000 psi, and only limited industry data exist. The few existing standards have overlapping requirements with other HP/HT codes and standards, such as the American Society for Mechanical Engineers (ASME) codes. Both API and ASME have limitations, and each undergoes revisions that can create conflicts when applying them to ultra-HP/HT designs.

The transition from 15,000 psi to higher rated working pressures hastens a change from 'thin-wall' to 'thick-wall' pressure vessel designs. Effects of plastic deformation and strain are significant design factors, particularly for hydro-static test conditions. There is a balance between testing the components above working pressure as proof of sealability but not overpressuring to the point where strain levels will damage the material.

Also, the pressure vessel’s increasing susceptibility to cyclic loads must be addressed to assure there are design margins against fatigue failure or a fast-fracture failure in areas of localized stress. These thick-wall designs create greater difficulty in manufacturing, fabricating or handling where there are changes in material properties through the wall sections.

When equipment functional requirements go beyond the defined boundaries of existing industry specifications, problems arise such as the effects loading conditions and working environments have on the equipment and the capability to manufacture it to the highest standards.

Oilfield equipment is of complex geometry, far from a simple cylindrical vessel or piping union design. It is subjected to a variety of extreme external loading conditions and environments that are not defined in ASME codes and standards. Not only must equipment designers possess the correct experience and skillset to overcome issues, but they must rely on sound engineering practices and judgment plus unique validation prototype testing pro-grams. Due to the limits on material yield strengths for sour environments, designs rated for working pressure greater than 20,000 psi require tighter design margins.

Cameron embarked on meeting this most recent request for ultra-HP/HT equipment by building upon ultra-HP/HT equipment designs created and fielded for a development targeting reserves at more than 9,146 m (30,000 ft) below sea level at 25,000 psi. New critical equipment designs such as valves, chokes, tubing and casing hangers, special lockscrews, and installation tooling had to be developed and qualified in a short time frame.

For the request at hand, immediate identification of material, validation and qualification was crucial. While the norm would be to validate everything, it would have added years to the program, so a criticality matrix was created. Validation was performed only on certain assemblies because of where these fit within the criticality matrix.

At the time of project inception in 2010, it was common belief that such a feat of engineering could not be accomplished. For one thing, there was no industry specification or guideline.

The bolting criteria played a role in leading the industry to believe that Cameron could not get past the bolting problem and past an actual cycle test of 0 C to 232 C (32 F to 450 F) at that pressure. But because the company understood preload requirements and had already designed the STS hanger, Cameron was confident the bolting issue could be resolved.

But there were still technological gaps for Cameron. The valve and choke, both critical components, did not exist. Also, the tooling required for installation did not exist. Valve geometry, wall thicknesses required, the cladding layer and risk of failure due to fatigue were critical issues.

Once valve and choke designs were completed, it was possible to build a manifold. The challenge was the sheer size of the manifold itself. Washout of the spools and the buffer chamber was of concern. In the past, buffer chambers were fabricated with pressure-containing welds, but due to the pressure, it was also realized that welding would significantly limit the structural integrity of the design. The company preferred that the design have no welds inside it. Manufacturing proved difficult because of the internal profile, size and diameters.

Sealing was also a big issue; Cameron developed a unique tubing hanger tool that could land the hanger while maintaining pressure on the control lines. It would have been easy to come up with a tool that just landed the hanger, but to lock and load and preload the hanger and also maintain pressure on the downhole safety valves posed a design challenge.

Drilling solutions were built using existing components. Using Cameron’s 15,000-psi BOP ram design as the starting base point, the 25,000-psi design uses new bonnets and bodies but uses the same cavity, elastomers and rubber seals as existing design elements. All components were then constructed to with-stand loads of 25,000 psi.

The existing API proof test required the equipment to withstand 1.5 times the pressure, so the gigantic body had to withstand 37,500 psi. All inlet and outlet connections were new designs. End connections had to resist 8 MMlb of end load, and the flange on this smaller-bore ram is 16 in. thick.

Manufacture of a single 70,000-lb BOP body required eight months to forge and machine. It was the largest piece of equipment Cameron's Beziers, France, facility had ever attempted to machine. Because of the loads involved and having to design heavy wall sections, the BOP bodies are massive. With everything in the BOP and connections, a single BOP weighed 90,000 lb. 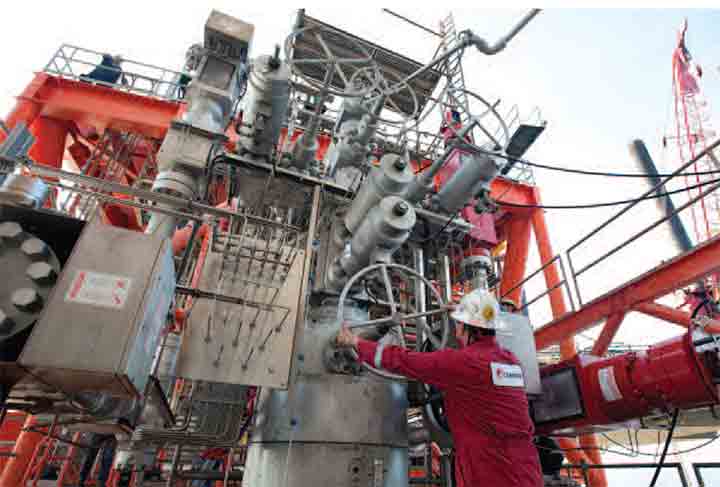 For the 25,000-psi production tree, the valve and choke, both criti-cal components, and the tooling required for installation did not exist. (Source: Cameron)

The body was assembled at Cameron's facilities in Houston, where preliminary testing, prototype testing and qualification testing was carried out. With testing complete by the end of 2011, the equipment was approved for use in the Gulf of Mexico in December 2011 and was placed in the field in first-quarter 2012.

Meet the challenges of high pressure and temperature with a variety of HPHT valves, hangers, and seals.