Scaling Up for Ultra-High Pressure

As the industry grapples to deﬁne requirements for operating in 20,000 psi and 350o Fahrenheit conditions, Cameron has already delivered what it calls ultra-HPHT technology, as Jennifer Pallanich reports.

A client using 15,000 psi equipment had a well off Louisiana that it thought might exceed 20,000 psi. It tasked Cameron with providing a 25,000 psi wellhead, production tree and blowout preventer, preferably in less than 18 months. That kind of engineering effort typically takes two or three years.

Cameron started what it refers to as an ultra-high pressure, high-temperature (U-HPHT) initiative about a decade ago. 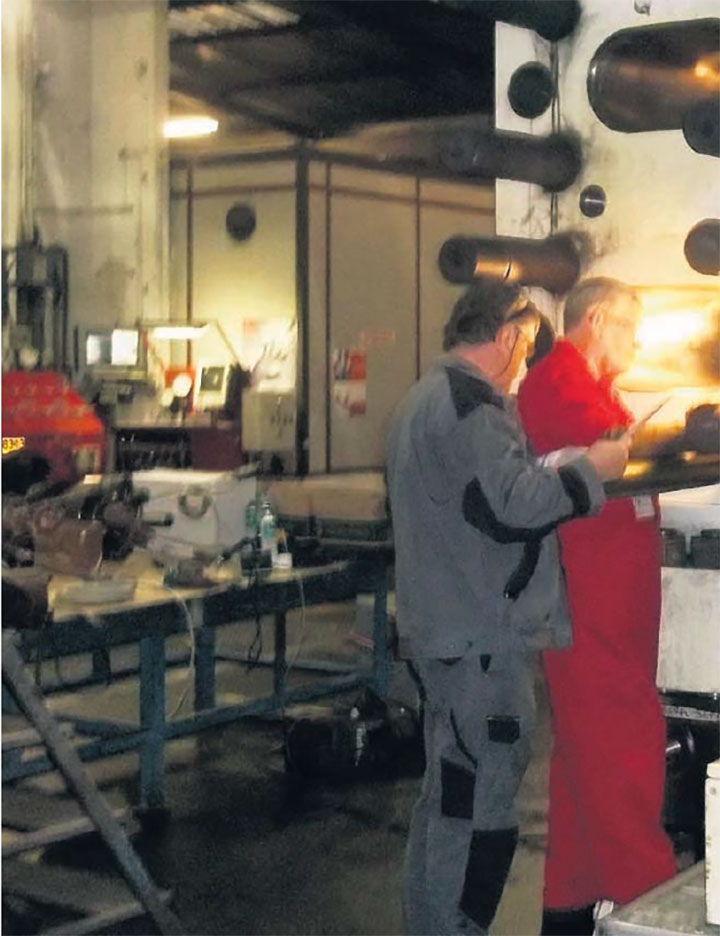 "We thought, if we develop a new wellhead and tree system, what are the other gaps?" Kirk Guidry, vice president of engineering, says. "We did some homework up front, and then we jumped into designs."

The company began validating its U-HPHT equipment in its Houston testing facility as early as 2006. Some equipment is still undergoing testing.

One of the ﬁrst HPHT areas Cameron considered was the production tree tubing hanger. A key challenge was ensuring the metal seal could maintain the preload so that it would seal at specified HPHT conditions of 30,000 psi and 400 degF, Guidry says.

When Cameron started thinking about the U-HPHT tubing hanger, they based it on "something that we knew worked", Guidry says. "It worked at 15,000 psi and was tested at 350 degF. But we didn't rule out, 'Let's get a blank sheet of paper and look at different seals'."

The tubing hanger design for HPHT conditions was "kind of engineering by committee. Engineers got together and looked at designs we thought would work."

Along the way, Cameron's engineers tweaked the seal material and worked to ensure the equipment could meet the necessary preload. The seal tested perfectly the ﬁrst time out, a story duplicated with the gate valve.

"We had the designs. We just needed to look at the material selection, look at the stresses, and modify our design," Guidry says.

Next, Cameron turned its attention to the gate valve. Ultimately, the company changed its gate valve geometry to address concerns that the support mechanism within the stem packing would not bear up under pressure, thus risking a seal collapse. 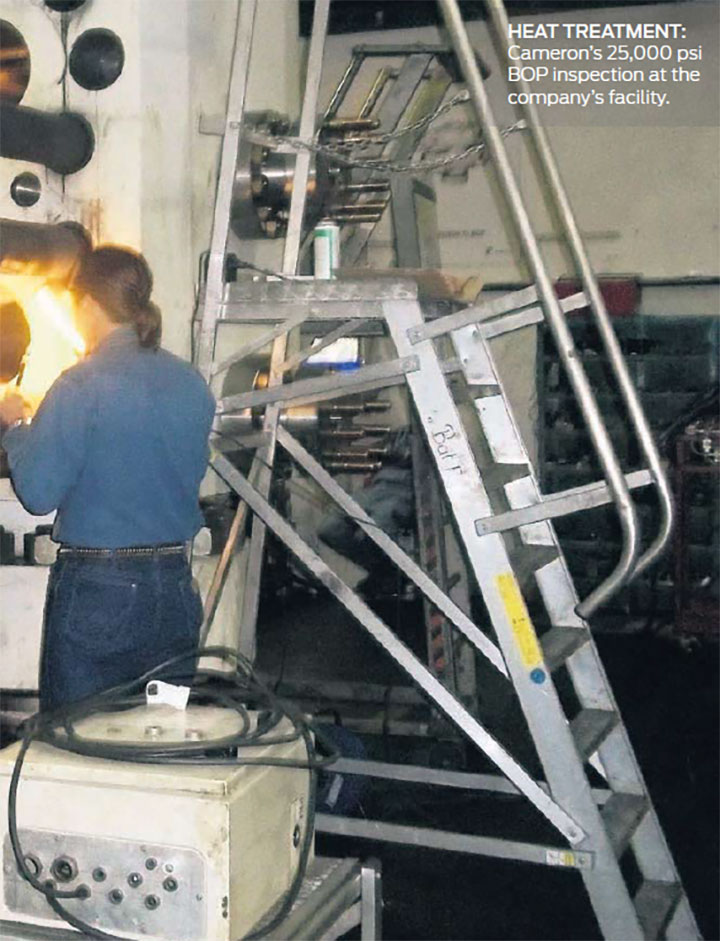 "Even though the design passed on our gate valve, during our testing for the choke we had some challenges and had to do some design changes there as well," Guidry says.

The new choke design uses the same bonnet connections as the gate valve, and the stem packing in it is big. Both the gate valve and choke use the same sealing technology.

There are changes in the works for even that technology, he says. "Where we lock in our hanger manually externally, we want to look at being able to lock it in internally." 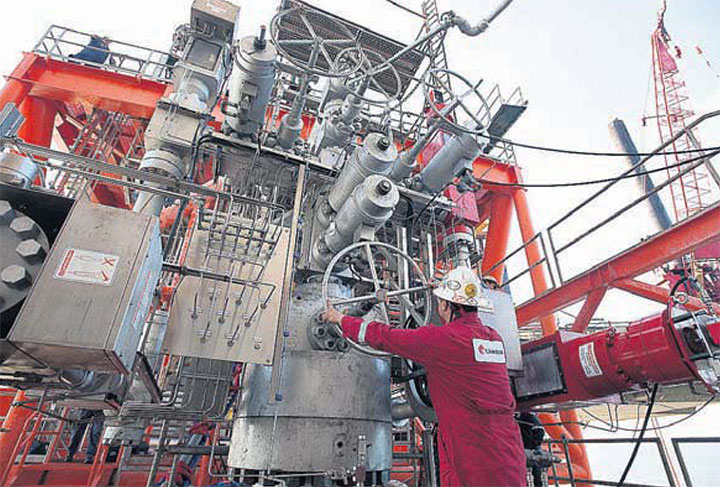 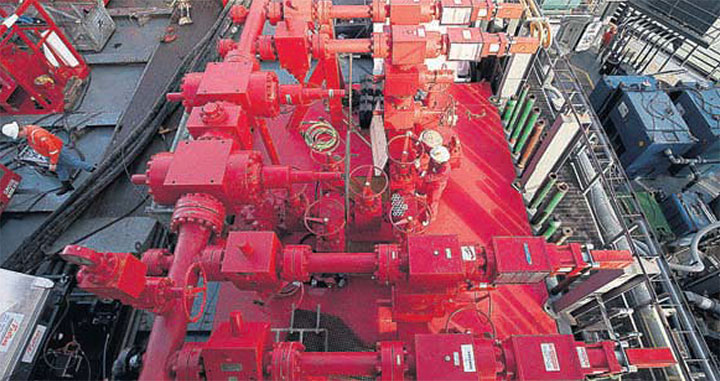 DESIGNED AND QUALIFIED: Cameron’s 25,000 psi partially cladded drilling manifold was transported on a complete skid to the offshore platform.

"After we designed and validated the equipment, the tools to install it were a huge challenge for us," Guidry observes. "Like a tubing hanger wouldn't have been able to deliver the preload and meet the safety requirements for our customer, so we had to completely redesign our installation tools for the tubing hanger, both sealing and being able to deliver the load in one trip."

Along the way, many hours of engineering and collaboration were devoted to the elastomeric and metal-to-metal seals, analysing the wall sections for operations in conﬁned spaces with higher pressures and loads, and the use of the BOP as part of the installation tool.

To date, no standards for conditions exceeding 15,000 psi and 350 degF exist, so suppliers must ﬁnd other ways to prove their equipment can safely operate at those conditions.

"The industry is struggling with the material properties for the design analysis and with new requirements for stress strain curves and fatigue testing of materials," Paul Bunch, engineering director, says.

"We're all trying to ﬁgure out how to do this without everybody going out and having to run their own tests. It hasn't been resolved. We're still in the process of ﬁguring out how to do that."

"It was really written for subsea equipment, but it's already being referenced for surface equipment," says Bunch, who was involved in writing that code and helped Cameron develop its qualification procedures for HPHT equipment.

Providing a BOP system for 25,000 psi did not mean just engineering to the expected 25,000 psi— it meant designing a system that could withstand the proof test, which requires withstanding 1.5 times the internal pressure, or 37,500 psi.

Gibbs gives the nod to the team that designed the ram for the 15,000 psi BOP, saying they made the piece strong enough to take extra loads. 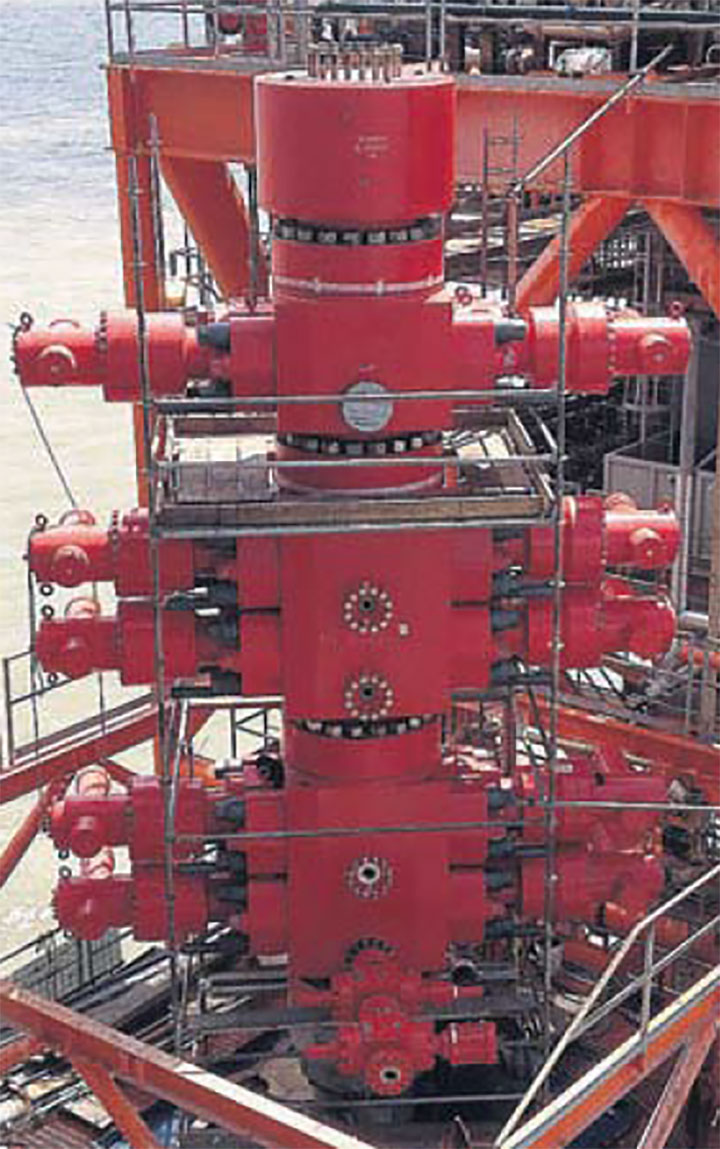 "Our predecessors left a little in the bank," Steve Shimonek, engineering supervisor, says. "Because they had the forethought to make it a little bit stronger than it really needed to be, we were able to take it further. But I don't know how much further we'll be able to take it from there. There will be another customer down the road who says, 'Oh we've got to have more than 25. We need 30, at least.' To start a clean-sheet-of-paper ram development [programme] would be several years, to do it right, the way this one was done, so it could go into the future."

Cameron is examining how temperature affects the materials it uses in its equipment. Most of the materials in conventional use are limited to 250 degF.

API guidelines drop the allowable yield stress from 100% to 85% of the pressure rating when the temperature reaches 350 degF. 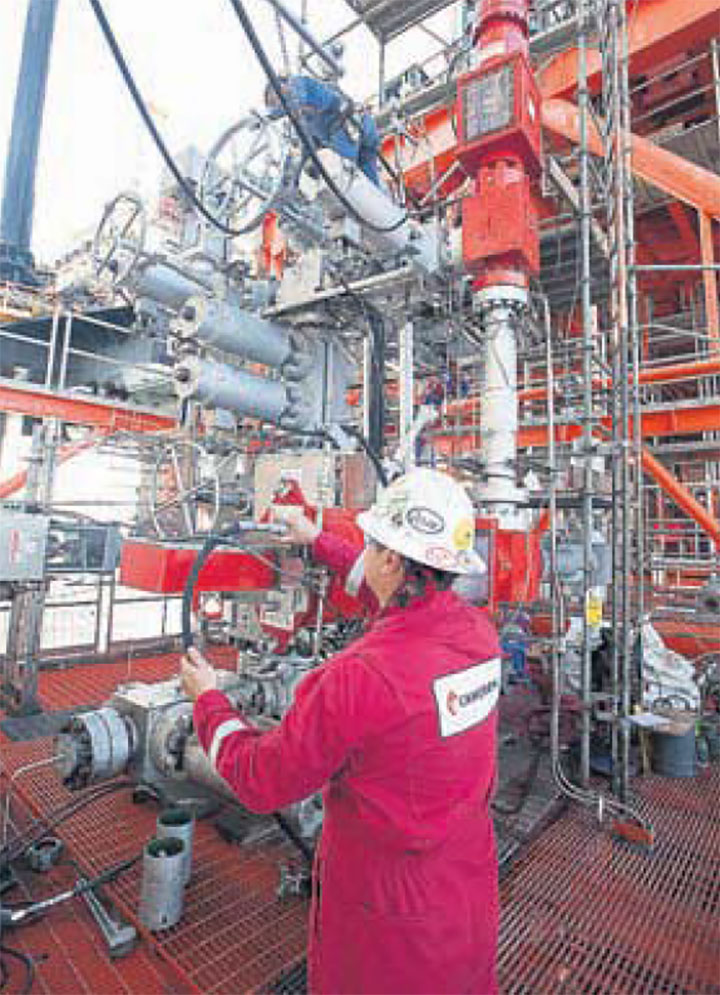 "There's only so far that you can extend things. You can only make things so large before they start crumbling. A lot of these things have been the same for 150 years. The connections are just larger, and larger bolts or studs hold them together.

They're getting so large that they're not staying together. We're at the point where we have to make major changes to how we do things," he says. "Everything had to be beefed up. So we had to design our own end connection."

The result for the 25,000 psi BOP was significantly larger ﬂanges, which were 15 inches thick rather than the 8.06 inch-thick ﬂanges Cameron uses on its 15,000 psi BOP.

"Any HPHT stuff, because of the loads involved, you have to have so much metal in these things that it's just massive," Gibbs says.

The raw form for the main BOP body itself weighed in at 70,000 pounds, making it one of the largest pieces of equipment ever machined at the Cameron facility in Beziers, France.

Cameron is working to develop a method that avoids the use of ﬂanges to connect the pieces of the BOP.

"We don't have a solution, but we'll get there," Gibbs says.

Drill pipe for high-pressure reservoirs is thicker, with a larger diameter, and often made of higher-grade material. The BOP must be able to cut that pipe, and the force needed increases in response to both the pipe but also the reservoir pressure itself.

"That's one of the biggest challenges," Gibbs says.

Cameron increased the standard operating pressure from 3000 psi to 5000 psi. This change helped obtain the needed force. However, this higher force required some of the other components of the BOP to be redesigned to carry the higher loads. The trick then became balancing out the required shear force with the ultimate capacity of every component in the BOP.

"We had to come up with different ways to get a lot more force than we were used to," Shimonek says.

Meet the challenges of high pressure and temperature with a variety of HPHT valves, hangers, and seals.