Partial or complete lost circulation is a common occurrence in Caltex Pacific Indonesia’s (CPI) Duri field in the Central Sumatra basin of Indonesia. Lost-circulation rates can range from one barrel per hour to total losses. The ChevronTexaco affiliate utilized cement and various other conventional lost-circulation materials (LCM) in an attempt to cure the losses, with varying degrees of success. Schlumberger worked closely with the CPI Drilling Team to create a solution to cure the losses and successfully cement casing after blind drilling to total depth. The following discussions describe how the new cement works, how it was applied in Duri field, examples of significant cost savings, and applications of the advanced fiber cement use with coiled tubing. The new cement solution was CemNET advanced fiber technology, a patented advanced cement that contains fibers to form an inert fibrous network across the loss zone, allowing circulation to be regained. The fibers are engineered to an optimal size for sealing loss zones and to convert a conventional cementing system to the lost-circulation system by mixing them with the slurry. The fibers, when added to the slurry and pumped downhole, form a matlike bridge over the fractures and help create the required filter cake. Use of these fibers has proven to be nondamaging to the formations. Advanced fiber cement to control losses can be used in all temperatures, in all slurry densities, and in most slurry formulations. Losses during cementing operations are eliminated, reducing the need for expensive remedial squeeze operations. Designed cement tops are achieved with a reduction in cement fallback. 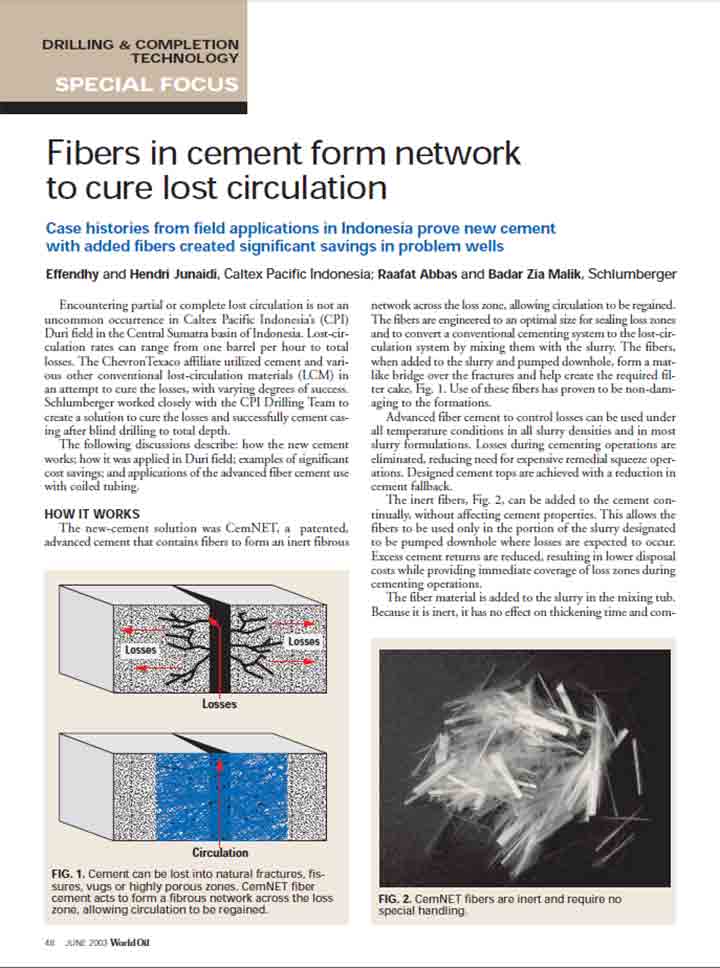