A New Reality for Fracturing Fluids

To say things have changed in North American well stimulation over the last decade is an understatement almost as large as the scope of the changes themselves. Permeability of the typical reservoir has gone down by roughly three orders of magnitude. At the same time, the industry is focusing three orders of magnitude more material on a fracturing work site.

In this changing landscape, the habits of fracturing fluid optimization have had to catch up to a new reality where the reservoir has rewritten the rules and market forces mandate better evidence-based tools to drive decisions about what is pumped.

A new dominant work practice
Service companies and E&P companies have put considerable effort into understanding how to chemically modify and enhance the properties of water so that it can be injected into a reservoir to complete the well and connect it to the producing reservoir efficiently and effectively. The chemical engineering objectives of a fracturing fluid fall into three categories:

Most optimization has historically concerned the first two points. The dominant work practice has become the use of friction reducers based on high-molecularweight synthetic polymers. These distribute smaller proppant grains within a complex and unpredictable fracture network using the turbulence resulting from high pump rates (occasionally exceeding 120 bbl/min). Given the increase in job volumes, it has become clear that polymer emulsion costs need to be optimized (which they largely have) and the preferred propping agent is a friction reducer that disperses and hydrates within seconds of injection.

The new high-viscosity friction reducers are seeing increased usage due to their ability to affect proppant distribution. However, it is not clear from field application that higher viscosity always connects to completion success. These products appear to perform differently in different basins, irrespective of the viscosity measurements performed. Further, the industry is beginning to understand that there is a sense of diminishing returns at higher product loadings, where production impairment can set in from too much polymer use. The oilfield solution to this situation has been to run an oxidative breaker to reduce fluid viscosity.

Myths and science of breakers
While it is true that breakers will reduce viscosity in a laboratory test, the water that is returned on initial flowback is typically salinated by contact with reservoir rock that has not seen water for millions of years. This salinity can have a stronger effect on solution viscosity by shrinking the polymer’s hydrated radius than breakers have on the polymer’s molecular weight. Further, it is puzzling that breakers applied to degrade polymer in the subterranean environment are the same class of chemicals used to assemble the polymers from their monomers. There is no clear argument that breakers selectively degrade polymer, and the unpredictable nature of breaker chemistry includes possibilities where gelation and even adventitious crosslinking of the polymer can occur.

Operators in infill drilling campaigns have the choice to evaluate these chemical issues as they move through a field. First, practical operational evaluation of the minimal required amount of high-viscosity friction reducers to execute a job design can be explored safely by working down from roughly 1 gpt per ppa to a basin-specific baseline level that places proppant to design (gpt = gallons per thousand gallons; ppa = pounds of proppant added per gallon).

Second, the question of breaker efficacy can be assessed directly by comparing offsets with and without breaker. Single-well operators are pooling their information to make these decisions, harvesting publicly available information to support these decisions. Flowback surfactants are another area where the industry has lacked a good prescriptive model to drive rational product selection and application until recently.

Flowback surfactants assist in dewatering the proppant pack and, perhaps more importantly, the fine cracks and small features that retain fluid within the distal portion of the fracture network where the capillary pressures are highest.

Figure 1: After the optimized stimulation and completion operations, oil and chemical tracers indicated that all stages were flowing and contributing to production. (Source: Schlumberger)

The problem for the operator in infill mode becomes balancing the potential uplift against the cost. There has been no easy way to accurately determine how the reservoir material would respond to the surfactant. For this reason, experts were guessing based on “pack drainage tests” that did not really measure an actual physical property of the system.

The lesson learned in optimization, both in the laboratory and the field, is the reservoir does not care how sophisticated the surfactant is; the rock simply wants what it wants. Sometimes no surfactant is necessary, and sometimes the least expensive offering shows the best potential to reduce the threshold pressure to initiate flow out of high-capillary-pressure cracks. The measurement breakthrough came from rational development of a scientifically sound experiment that measures contact angle on customer shale samples.

The test works with cuttings or core material, and it features high reproducibility and a robust underlying mathematical model so the test results are not confused by variations between test packs (a confounding feature of the more common pack drainage test that is widely used to recommend surfactants). Operators are beginning to request and retain this service for all new completions when facing high reservoir heterogeneity. 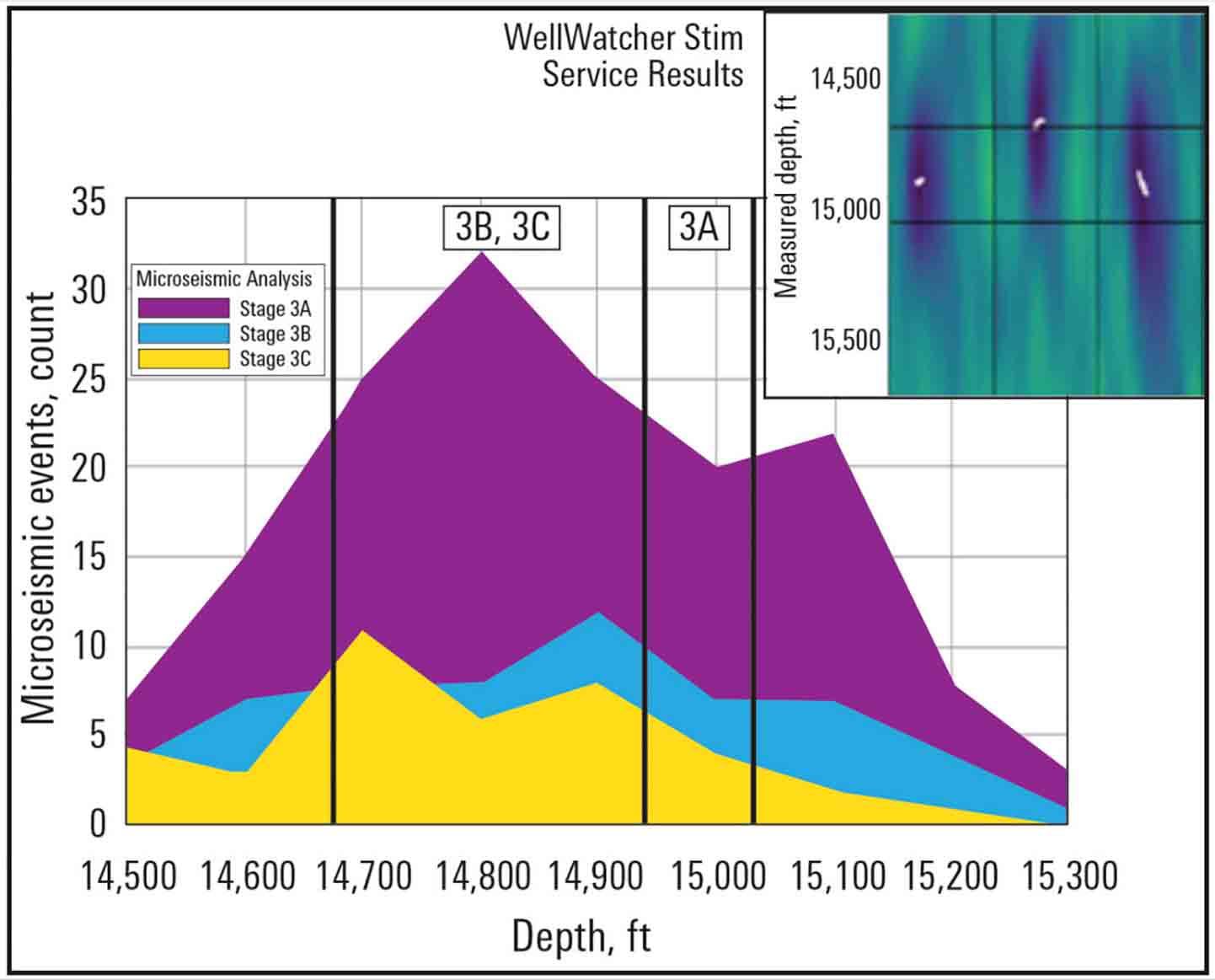 Another area of fluid design undergoing a renaissance of optimization is fluid diversion. The practice of pumping pills of degradable particles to ensure even wellbore coverage during a stage is well established, but unfortunately it is difficult to know the balance of clusters taking fluid versus clusters not taking fluid to enable a planned approach to diversion.

The WellWatcher Stim service can confirm the efficacy of stimulation treatments. In the Haynesville Shale, the service identified fluid entry points and verified efficient diversion (Figure 2). Integration of laboratory measurements, real-time field data and retrospective analysis of completed projects are combining to enable a new paradigm for fracturing fluid optimization that will help unlock further value in unconventionals.

Integration of laboratory measurements, real-time field data and retrospective analysis of completed projects are combining to enable a new paradigm for fracturing fluid optimization that will help unlock further value in unconventionals.