Yes, We Really Are Talking About Zero Survey-Related Rig Time

From the bit on up through the entire BHA, we’ve made tremendous leaps enabling well construction at remarkable speeds. Technologies cut rock more efficiently, increase ROP, perform various measurements while drilling, and even see ahead of the bit or characterize reservoir fluids while drilling. However, the one function that has halted while-drilling progress—the missing link, if you will—has been survey time.

Stopping the drillstring had long been required for an MWD survey, adding hours to daily drill time and bogging down footage per day. Incremental efforts have reduced survey time, but what the industry has sought up to now is a technology as accurate as the best MWD and while actually drilling with the bit on bottom to sustain BHA trajectory, avoiding stuck pipe and damage to the wellbore. Enter TruLink definitive dynamic survey-while-drilling service.

What is the “why” motivation behind definitive dynamic survey while drilling?

The motivation behind everything we do always comes back to customer centricity and performance. The decades-long objectives for surveys have been on precision—for better data and more of it. The roadblock to performance, however, has been time. Precision was dictated by stopping drilling to perform surveys. Now, recent advances minimized that by refining various technologies to conduct those surveys during connection time. But you still had to stop, which added 9 to 12 minutes per stand. And stationary surveys can open you up to drilling risks like stuck pipe in the curve and lateral.

Time is a parameter but at the heart of this is data. Better decision making relies on it—and the more data you have and in real time, the more sound the decision. That is where we began looking for improvement. How do we get more data from every point in the well but without slowing drilling to a proverbial halt?

What was a key breakthrough for definitive dynamic surveys?

The key was our experience with measurement-while-drilling systems. We are providing the industry’s first survey-while-drilling service with six-axis directional and inclination sensors, along with high-speed telemetry rates at 24 bps, advanced drilling dynamics with three-axis shock and vibration, and reliable turbine power.

Zero. That’s the amount of survey-related rig time required for definitive dynamic surveying. It’s simple math, really. Not stopping to survey eliminates survey time from the mix. Surveying is while the drillstring is rotating; while the bit is drilling on bottom.

How does the technology compare to the accuracy of conventional or gyro survey?

Definitive dynamic survey accuracy has been compared to both continuous gyro surveys and static MWD surveys, yet has its own unique errors and an associated error model developed from both lab and downhole data to make it as robust as possible. In each run, the error models have proved to be valid and the comparison between other survey tools shows excellent performance. Definitive dynamic surveys are at least as accurate as any gyro or MWD system and can be considered an improvement with the number of quality surveys gained throughout the wellbore, providing improved wellbore definition.

Where has it been run?

Technology testing in our customers’ own backyard is a huge focus for Schlumberger. Indeed, our global footprint enabled us to complete fit-for-basin precommercial deployments of definitive drilling surveys while drilling in the Middle East, North Sea, and South America. 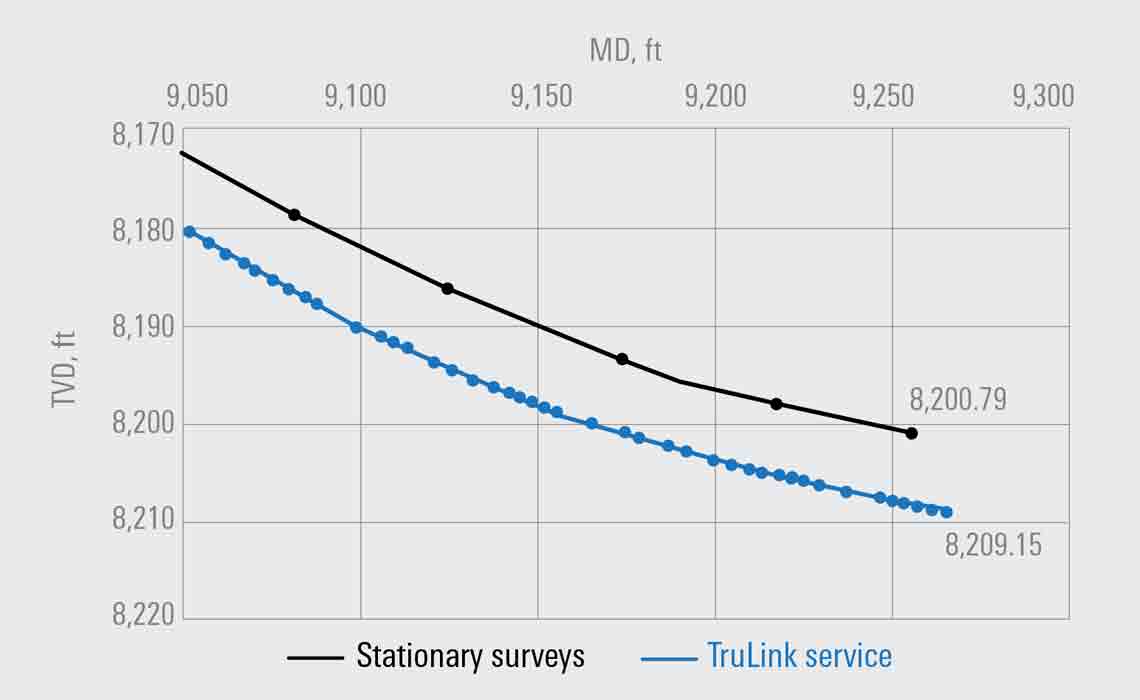 One such deployment by Saudi Aramco minimized tortuosity in a complex well profile. Measurements were taken from every point of the well as the BHA rotated on bottom. In fact, comparison between stationary-survey data and definitive dynamic surveys while drilling revealed a considerable 10-ft difference while landing the 8 1/2-in curve section. Additionally, continuous surveying enabled real-time steering adjustments to minimize wellbore tortuosity while reducing the ellipse of uncertainty. The wellbore trajectory was smoother and TVD more accurately placed 10 ft below the reservoir top.

Another example demonstrated that definitive dynamic surveys run in the vertical, curve, and lateral sections saved the operator an average of 41 pumping hours while acquiring 1,041 surveys. And following three evaluative runs, another operator concluded that definitive dynamic surveys were virtually comparable to gyro surveys. They predicted reducing survey time by two months per year and eliminating related activity time for stuck pipe by 3 months per year.

What should customers take away from this technology?

It goes back to zero survey-related rig time. But the value add is also speed, accuracy, and durability. This technology is deployable from the very start of drilling the tophole, delivering continuous confirmation of BHA location and the lithology being drilled to help avert washouts and sustain wellbore trajectory all the way to TD. It’s borehole data in real time, through every point of the well. And that translates into more reaction time before encountering drilling risks. Efficiency, accuracy, and costs improve—and all without spending a second of rig time on surveying.