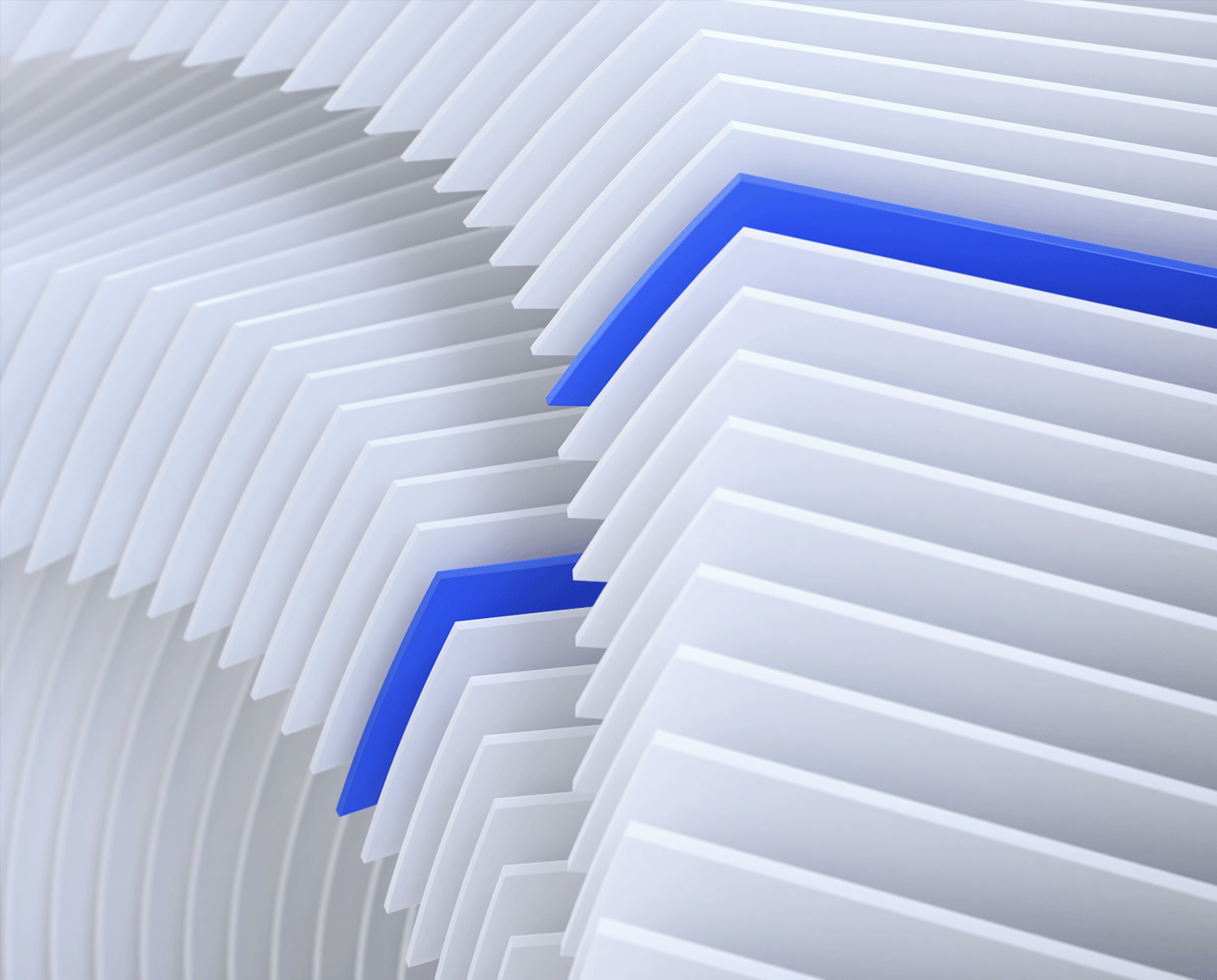 Geophysics is the study of the physics of the Earth, the propagation of elastic waves within it as well as its electrical, gravitational and magnetic fields. Although the origins of geophysics can be traced to ancient times, it was not until the early 20th century that scientists began applying geophysical concepts and techniques to the search for hydrocarbons and minerals and to evaluate geothermal energy resources. Now, geophysics plays a critical role in the petroleum industry because geophysical data are used by exploration and development personnel to make predictions about the presence, nature and size of subsurface hydrocarbon accumulations.

The challenges usually encountered in geophysics are posed in the form of an inverse problem, such that a set of measurements and known physical laws will permit a geophysicist to determine the Earth's structure and characteristics that are consistent with those measurements. In geophysics, the answers are almost always nonunique, meaning there is more than one possible solution that satisfies the measurements. Geophysicists attempt to resolve this ambiguity by integrating complementary data acquired from dissimilar methods or by adding supplemental knowledge such as wellbore measurements to determine which solution is correct.

In addition to nonuniqueness, all geophysical methods exhibit a decrease in the resolving power with distance from the measuring equipment. This concept is analogous to the difficulty of distinguishing objects by sight at increasing distances. The characteristic is more pronounced for some measurement methods than for others, but the result is that the deeper the subterranean structures, the less precise are the images of such structures.

In the oil field, the dominant geophysical data acquisition method is the seismic survey, whose history dates from the early 1920s. Seismic surveying employs a source—typically an airgun or a vibrating truck—to generate vibrations, or seismic waves, that propagate into the Earth. The seismic waves are refracted and reflected by subterranean strata and structures (Figure 1). Some of the energy returns to the surface, where it is recorded by sensors such as hydrophones or geophones. The distances between source and sensor can exceed 15 km [9.3 mi]. 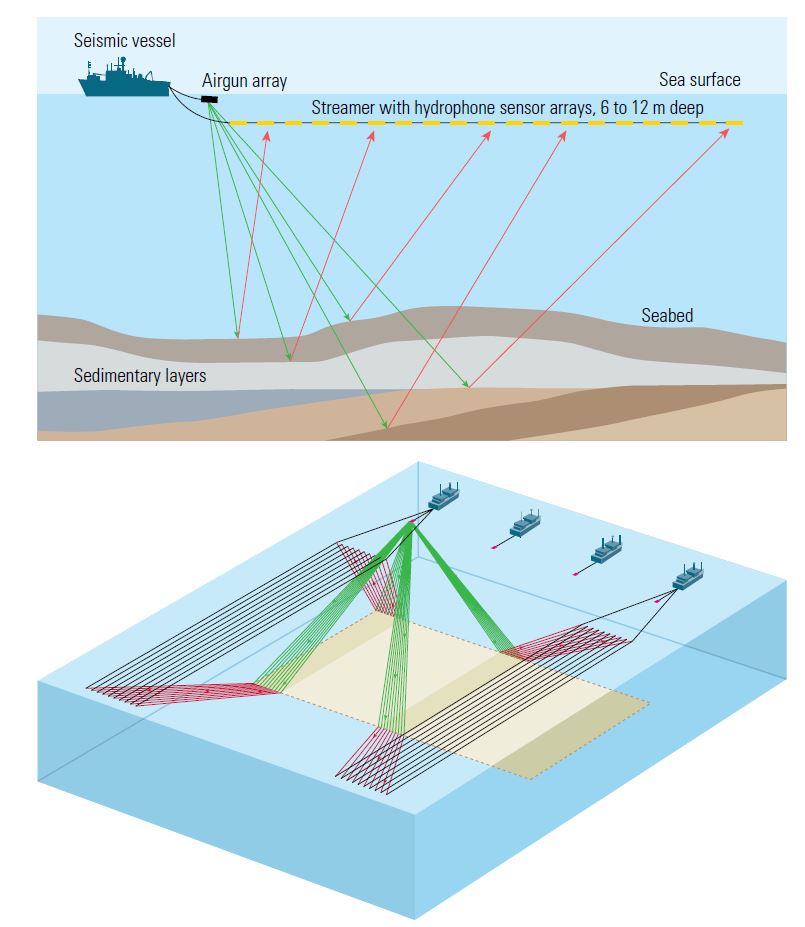 Figure 1. Marine seismic acquisition. An airgun array (top) produces pulses of seismic energy (green) that penetrate the subsurface and are reflected back (red) from the seabed and interfaces between rock layers. These reflections are detected by hydrophone arrays towed behind the seismic vessel. Geophysicists invert the recorded data to construct a 3D image of the subterranean layers. Modern seismic acquisition methods (bottom) illuminate 3D swaths of the Earth from a variety of angles. In one common geometry, four ships cruise in line abreast approximately 1.2 km [0.75 mi] apart. Each ship tows an airgun source array (red rectangles) a short distance behind. The outermost ships also tow streamers (black lines) typically 10 km [6 mi] in length, which record the reflections from below the seabed and within a rock volume (tan) beneath and between the two sets of streamers.

Geophysicists process the survey data to form an image and to estimate the physical characteristics of the subsurface. This requires two steps: develop a 3D velocity dataset, or volume, to produce a smooth estimate of the spatially varying velocity with which the seismic waves propagate in the Earth—a process called tomography—then, with the help of this velocity dataset, locate the subsurface layers from which the seismic waves were reflected, a process called migration.

The resulting 3D representation of the Earth is called a structural image, or volume. The reflecting surfaces are interpreted as the interfaces between rock layers, some of which may have been folded, cracked, faulted or eroded over geologic time. It can be sliced vertically to obtain a cross section or horizontally to map the depths of the rock layers beneath the survey area. The operator can use these interpretations to help determine suitable drilling targets. Modern seismic surveys routinely produce detailed 3D images of these reflecting surfaces to depths of 10 km [6 mi].

Additional information about the characteristics of the rocks can be extracted from seismic data. For example, by studying the size, or amplitude, of the reflections and how the amplitude changes with the angle at which the seismic waves hit the reflectors, geophysicists may be able to determine whether the pores within the rocks contain gas, oil or water. This step, known as amplitude versus offset (AVO), often has a higher level of uncertainty than does structural imaging.

Although most seismic work uses active sources designed to create seismic waves, the detection of weak seismic waves generated during hydraulic fracturing is of increasing interest. These faint signals are used to determine the locations of microseismic events, which can indicate the position and extent of the hydraulic fractures.

To reduce the interpretational uncertainty remaining after seismic surveying, geophysicists can choose from several techniques. The most common are electromagnetic (EM) methods, which leverage the fact that some important subterranean formations have strong EM signatures. For example, rocks saturated with hydrocarbons often have much higher electrical resistivity than those containing water and is the basis of wireline resistivity logging. Salt deposits have both a high seismic velocity and a high electrical resistivity. Their high velocity makes seismic imaging beneath them problematic, but their high electrical resistivity makes them easy to detect using EM surveys.

Geophysicists have two distinct methods for acquiring information about the electrical characteristics of rocks at depth. They can use either a high-powered EM source or fluctuations in the Earth's magnetic field induced by the solar wind as a natural EM source. In both cases, the response of the Earth is detected via an array of receivers deployed on, or near, the surface. The first technique is called controlled-source EM (CSEM) and was developed in the 1980s. It is most commonly used in marine settings, where anthropogenic noise, for example, radio signals or power line noise, is less problematic than on land. The second EM technique, magnetotellurics (MT), was introduced in the 1950s. Some modern systems can acquire CSEM as well as MT data when the controlled source is not active (Figure 2). 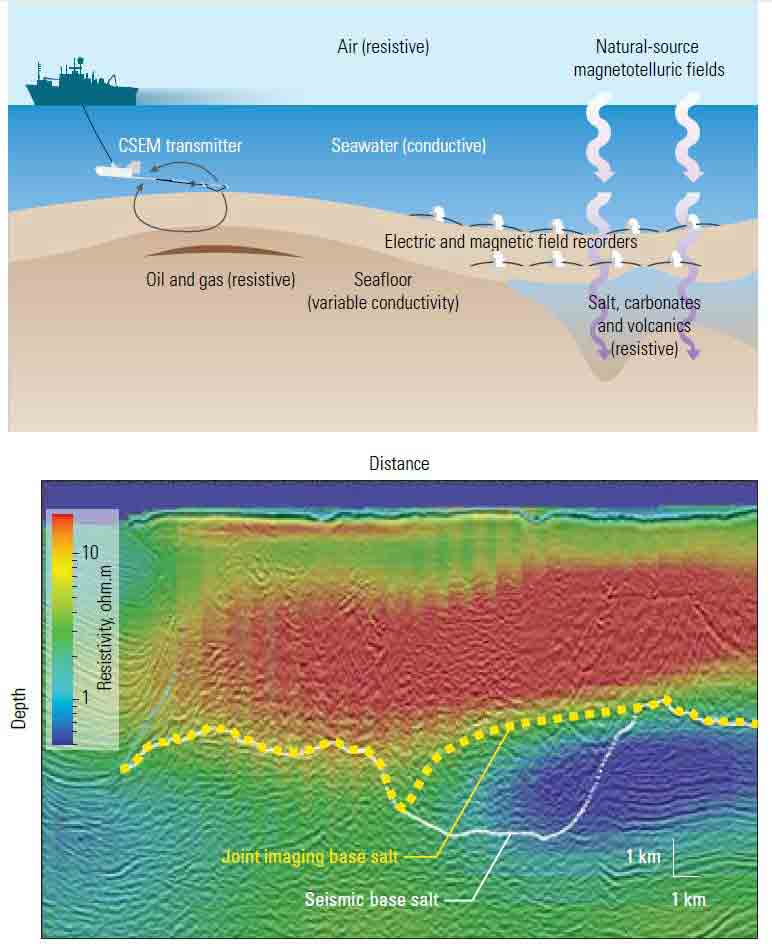 Figure 2. Marine magnetotellurics (MT) and controlled-source EM (CSEM) acquisition. For marine MT studies (top), electric and magnetic recorders on the seafloor make time series measurements of the Earth's varying magnetic field and the induced electric field, which can be interpreted to infer deep geologic structures. Towing a CSEM transmitter, which has receivers behind it, close to the seafloor allows geophysicists to map shallow structures, including thin, resistive features such as hydrocarbon reservoirs. Joint evaluation of multiple geophysical measurements (bottom) enables geophysicists to obtain a consistent interpretation of the base of salt. The best interpretation based solely on seismic data showed a thick section of salt to the right of middle, whose base is indicated by the white line. Adding MT resistivity data (colors) provides significant new information. Combining seismic and MT data improves the previous interpretations of the base of salt and gives interpreters greater confidence in their result (yellow dashed line).

Because of the frequency of the EM signal and the acquisition geometry, MT surveys are best suited for basin-scale studies, while CSEM surveys are more appropriate for detailed reservoir-scale targets and high-resistivity anomalies. Consequently, the CSEM method is typically used to investigate potential hydrocarbon reservoirs previously suggested by seismic images.

Magnetic surveying is another type of subsurface prospecting. Unlike EM methods, which rely on fields that fluctuate rapidly in time, magnetic surveying depends on the permanent magnetic properties of rocks, whose strength and orientation are fixed at the time of their deposition and may be in contrast with those of the surrounding rock. Measuring these subtle anomalies can help geophysicists map subsurface formations over large areas.

The advantage of magnetic surveying is that data can be collected from aircraft or satellites as well as from land or by ship. Consequently, magnetic surveys can inexpensively cover large geographic areas as well as sites that are otherwise difficult to access. Because the strongest anomalies are produced by volcanic or metamorphic formations, magnetic surveys are widely used for mineral exploration.

Gravity measurements have been applied in the oil field since the 1920s. The technique is based on recording spatial variations in the Earth's gravitational field, caused by differences in the density of rocks below the survey location. The size of these variations is typically less than 1/100,000th of Earth's gravitational field's nominal value of about 9.81 m/s2 [32.2 ft/s2].

Detecting such small variations requires extremely sensitive instruments and the application of multiple corrections. For example, the Bouguer correction accounts for variations in gravity caused by local topography and corrects for the influence of latitude and measurement altitude that might otherwise mask the signal. Because the low density of salt generates a large gravity anomaly, the most common oilfield application of gravity surveying is to help delineate salt domes. Gravity data are frequently acquired using aircraft and satellites; taking measurements by ship is also common.

Geophysical methods are applied in various ways. For example, seismic receivers are sometimes deployed in boreholes to generate detailed images of small portions of the Earth. In addition, certain niche techniques, such as the hyperspectral imaging, spontaneous potential and electrokinetic—seismoelectric and electroseismic—methods, are available but are not widely used. Of all geophysical techniques, seismic surveying is by far the most widespread. Because of this dominance, "seismics" and "geophysics" are often used interchangeably in the oil industry, although for purists, this is wrong. Nevertheless, the integrated use of complementary geophysical methods provides critical information about the subsurface. This information is used by exploration and development personnel to make decisions about where and how to drill.