Perforating—the act of blasting holes through steel casing, cement and formation rock—happens in an instant, and yet, the long-term viability and profitability of most oil and gas assets depend on it. Perforating guns carry explosive shaped charges downhole, where they are detonated to create tunnels that act as conduits through which reservoir fluids flow from the formation, into the wellbore and up to the surface.

In the 1920s, E&P companies began the practice of cementing metal pipe in the wellbore. The cement supported the casing and isolated producing intervals from other zones. Although effective, the practice created a dilemma for operators: how to reach the hydrocarbons on the outside of the pipe. Bullet guns were originally used to mechanically punch through the pipe and cement, but their penetration and effectiveness were limited. Shaped charge technology, based on military antitank weaponry, was introduced to the oil field in 1948. It revolutionized well completions.

A shaped charge has an outer shell that houses a primer igniter and explosive material, which are held in place by a conical liner (Figure 1). The igniter acts as the link between the detonator cord and the explosives in the shaped charge. The liner does more than hold the explosives in place; its conical shape creates a high-pressure jet of energy, which penetrates the casing, cement and formation.

Figure 1. Shaped charge detonation. A shaped charge (top left) consists of a small primer igniter, an outer casing, explosive material and a conical liner. The detonator cord connects individual shaped charges (upper right) and, when detonated, begins a chain reaction in which the liner focuses the energy of the explosives into a jet (middle left). This generates a tremendous high-velocity pressure wave. The jet tip travels at 7,000 m/s [22,965 ft/s] and exerts as much as 103 GPa [15 x 106 psi], creating perforation tunnels that penetrate the casing, cement and the formation (bottom right). 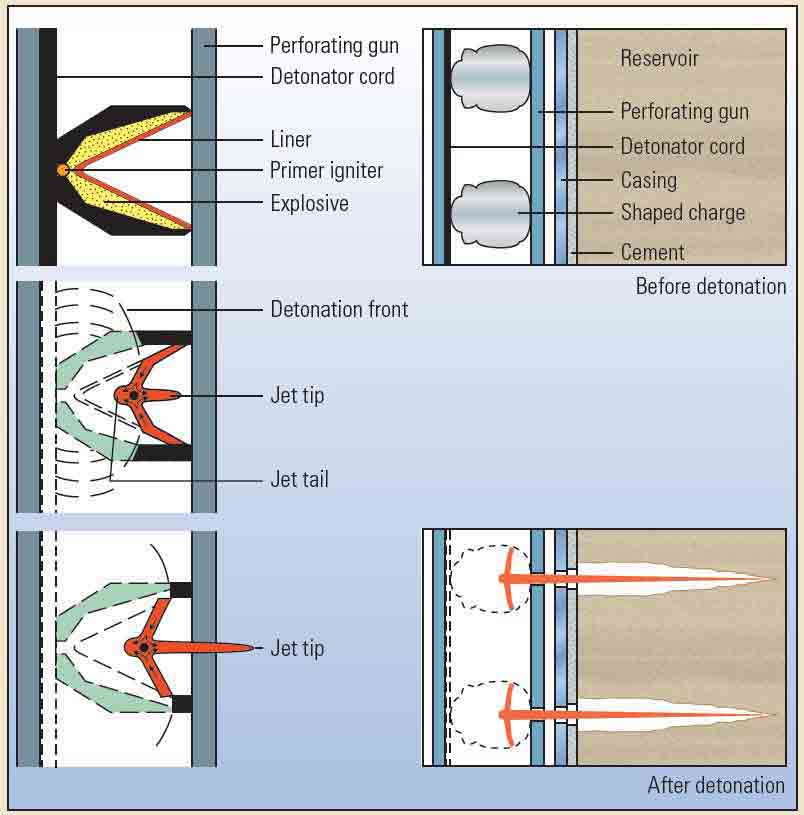 Perforating involves the use of high-order explosives, which must be handled with great care. Most explosives used for perforating are referred to as secondary explosives, meaning another source must initiate their detonation. A blasting cap detonator usually begins the chain reaction; the detonator may be electrically or mechanically initiated. Conventional blasting caps are electrically initiated when a current passes through a filament, which ignites a match that sets off a lead azide primary explosive charge (Figure 2). Mechanically initiated blasting caps are also referred to as percussion detonators. The blasting cap is connected to the detonator cord, which creates the shockwave that sets off the shaped charges in the perforating gun, all of which culminates in the creation of perforation tunnels.

Figure 2. Electrical detonator. There are many varieties of detonators; some are electrically initiated, others are set off by pressure or mechanical shock and do not require electrical power. Engineers set off electrical detonators such as the one shown by applying current to the leg wires. This heats a filament wire, causes a pellet to ignite and begins a chain reaction as lead azide and RDX in the primer and booster sections set off the detonator cord. Lead azide is a type of primary explosive; RDX is a type of secondary explosive. The safety resistors attached to the leg wires serve two functions: They inhibit the flow of induced current in the wire and provide a known value of resistance, which can be checked with a safety meter to confirm that there is continuity through the filament in the ignition pellet.

Electrical detonators have proved to be quite reliable, but a number of safety practices have been developed to prohibit the unintentional detonation of the caps. Such practices include grounding electrical systems and shutting off power during the arming of guns. Today, radio transmissions pose one of the greatest dangers to conventional blasting caps because these transmissions may induce current in the detonator wires. When perforating with conventional blasting caps, wellsite personnel must shut down radio transmitters, which include cell phones.

Because today's wellsites rely on continuous communication via radio, shutting down all transmissions is problematic. To address this drawback to using conventional detonators, engineers designed a detonator that contains no primary explosives and has a power threshold of 3 megawatts to initiate detonation; a conventional blasting cap detonator has a power threshold around 1 watt. When operators use this new detonator, radio transmissions can continue safely during the arming of guns because stray voltage or induced current cannot initiate detonation.

Perforating guns come in a variety of sizes and configurations. The two primary categories of gun systems are through-tubing guns and hollow-carrier, or casing, guns (Figure 3). Hollow-carrier guns are larger than through-tubing guns and facilitate bigger charges, more phasing options and higher shot density. Phase is the angle between individual charges, expressed in degrees, and shot density is the number of holes per unit of length. Completion hardware in place and reservoir properties usually dictate the type of gun system used. However, operators may install a particular type of completion to accommodate a perforating system that is suitable for a specific reservoir. 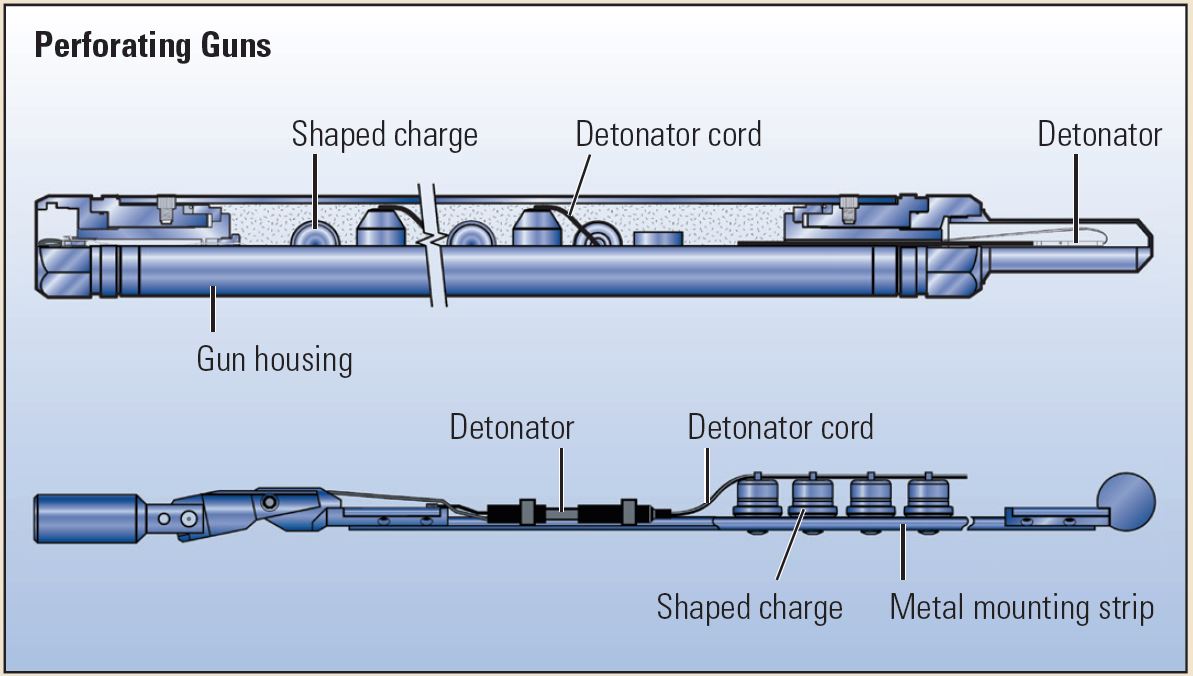 In wells that contain tubing, operators use small-diameter through-tubing guns. These systems consist of either expendable gun systems that leave debris in the wellbore after detonation or retrievable gun systems with a mounting strip that can be recovered after detonation. Through-tubing guns can be used in underbalanced conditions, in which hydrostatic borehole pressure is lower than formation pressure. After detonation, formation fluids flow into the well, flushing debris from the newly formed perforation tunnels. The well can be immediately flow tested or put on production. With through-tubing guns, operators can add perforations to producing intervals, or open new zones without the expense of removing the tubing. If the guns are to be retrieved after perforating, the well is usually perforated in an overbalanced condition, in which the borehole pressure is higher than formation pressure. If the well is perforated underbalanced with casing guns, the operator must kill the well to retrieve the guns.

Perforating guns are conveyed in the well using a variety of methods. Tubing-conveyed perforating (TCP) guns are attached to tubing and run in the well using a drilling or workover rig. TCP guns offer benefits such as leaving the tubing in place after perforating underbalanced, along with the improved performance and flexibility provided by using hollow-carrier guns. Because wells can be perforated underbalanced, flow to surface may be initiated immediately. Long intervals and widely separated zones can be simultaneously perforated using this method; other techniques require multiple trips into the well. One drawback to the use of TCP guns is that a drilling or workover rig is required to run the guns into and out of the well. If the guns are to be retrieved, the well must be killed.

Although operators consider many factors when designing a perforating program, the reservoir generally dictates which system will be used. For instance, formations that are prone to producing sand perform better with high shot density and large holes (Figure 4). Operators often perforate with large-diameter TCP guns that produce many holes per linear foot. Depth of penetration for these types of formations does not affect well performance. Formations damaged during drilling and completion, however, perform better with deep penetrations that extend beyond the damaged zone. Deeper penetration, however, comes with the disadvantage of smaller diameter perforation holes. Underbalanced perforating in wells with formation damage may also improve well performance. 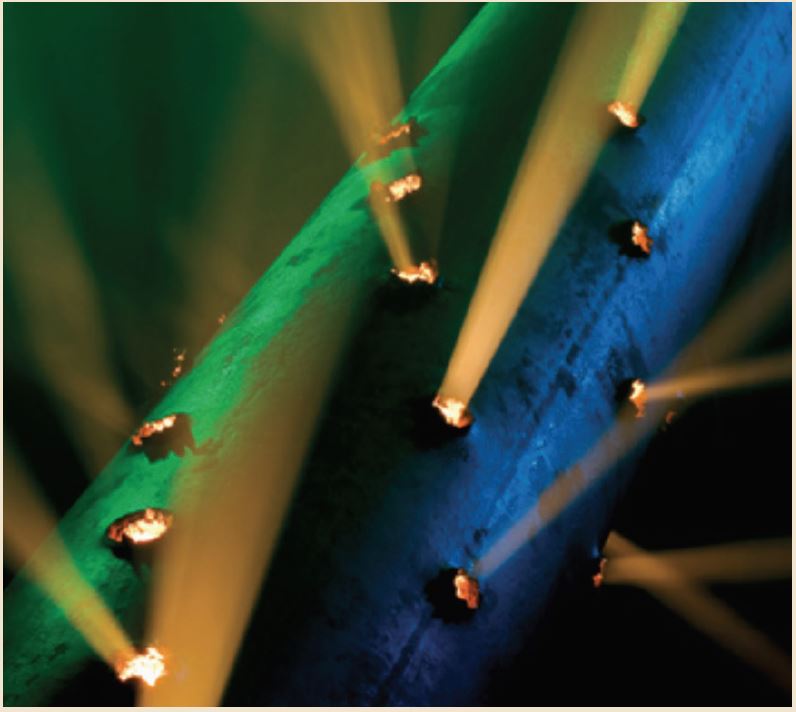 The act of perforating may be over in an instant, but engineers and scientists realize its importance for the long-term viability of a well. They continue to develop perforating techniques based on improvements in equipment design and deployment systems. Engineers are also using advanced modeling and testing of existing perforating systems to improve results. The ultimate objective is to allow oil and gas to flow from the formation to the surface in a safe and secure manner.