With hundreds of thousands of well stages completed every year using the plug-and-perf (PNP) technique, it is the No. 1 stimulation process used in unconventional reservoirs. The inherent need for plug removal in a PNP operation has fueled the evolution of these devices to incorporate features to facilitate such removal. Early fracture plugs were made from metal and featured solid mandrels, making them extremely robust. As wells became longer and stage count higher, plug millout proved to be challenging. Under such conditions, returns do not easily reach the surface, and fluid is often lost into the recently created fractures. Debris from the plugs removed can accumulate in the horizontal section, posing a risk of getting the coiled tubing (CT) stuck during the operation.

As the industry demand for milling efficiency increased, plugs evolved to use softer materials. Plug mandrels moved toward composites and, similarly, slips moved to cast veneers and then to the various button materials currently in use. The latest efficiency improvement efforts focus on plug architecture, transitioning from topset designs to bottom-set designs. These designs eliminate the internal plug mandrel, which reduces the volume of material to mill and cleanout of the well. Combining this efficient design with advanced materials enabled the creation of the FracXion Micro fully composite fracture plug: short, strong and rapidly milled.

While the evolution of composite fracture plug technology has led to large efficiency improvements for multistage completions, it is the use of degradable materials that has provided a step change alternative on current PNP completions. This technology, when properly implemented, can reduce or eliminate mechanical interventions during and after stimulation operations. This track points to the ultimate goal: reliable, self-removing, temporary isolation. Furthermore, dissolvable technology, such as the ReacXion fully dissolvable fracture plug, has been developed and improved in parallel with the latest generations of conventional plugs. 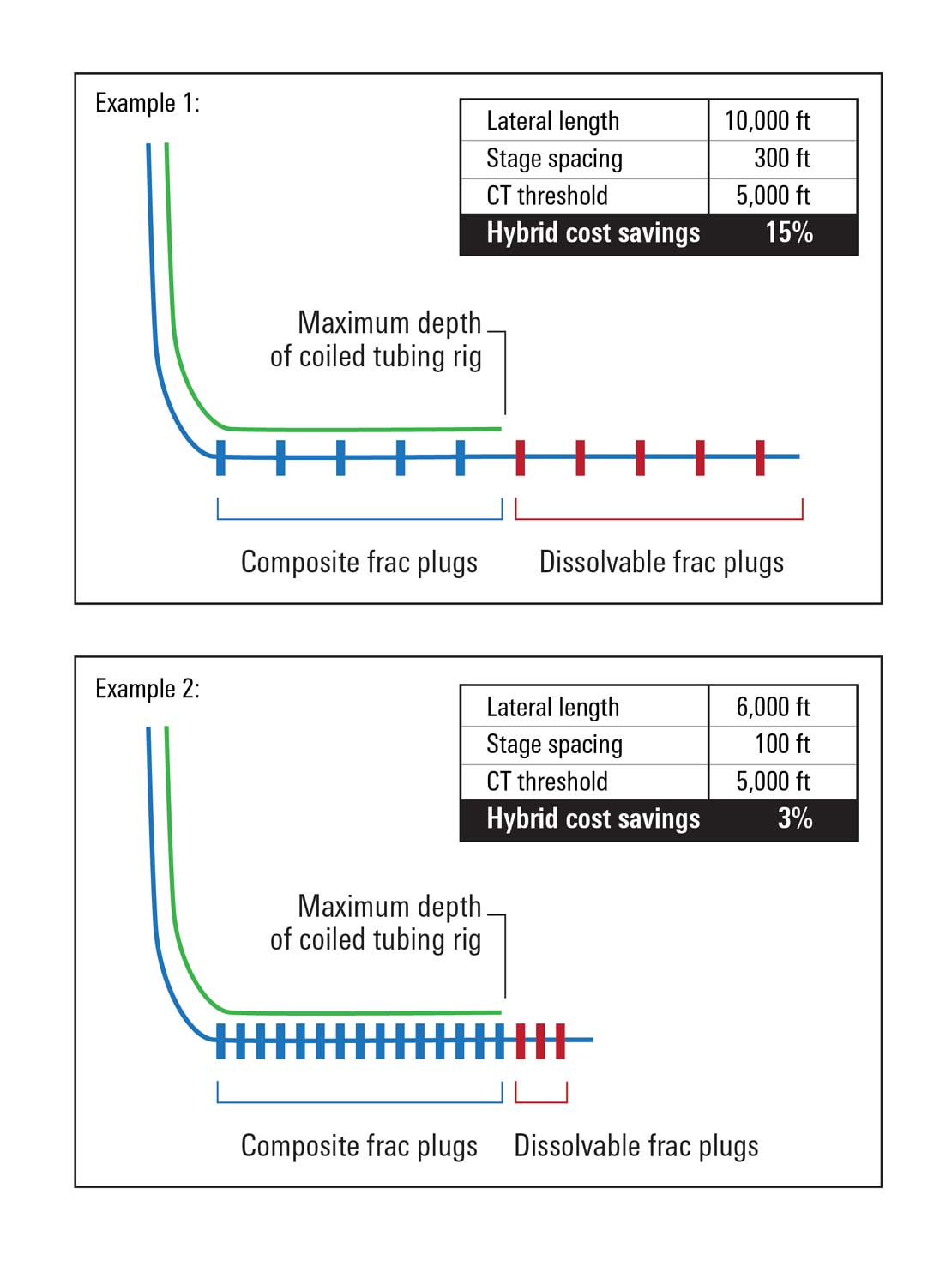 Studies have shown that cost savings are determined by a combination of lateral length and stage spacing. (Source: Schlumberger)

Dissolvable technology delivers efficiency gains by optimizing the completion process and the requirement for mechanical intervention post stimulation. However, early applications demonstrated that using a degradable fracture plug over a composite is not always a simple 1:1 swap. When dissolvable technology was introduced, some operators replaced conventional fracture plugs without any adjustments in their completion strategies— resulting in mixed success similar to the industry’s initial experiences with ball-drop and pump down plug technologies. Moreover, just as the early composite fracture plug experience led to operational lessons learned and efficiency best practices, the industry is developing workflows and recommendations for optimizing completions with dissolvable plugs. Not all dissolvable technology is equal regarding dissolution speed, efficiency and thoroughness of dissolution. As with any completions decision, optimizing the completion process to incorporate degradable plugs requires carefully balancing efficiency with other economic and technical considerations.

As the degradable technology adoption continues to grow, the operational experience has led to best practices that allow operators to eliminate the need for all mechanical intervention after stimulation. Modern “frac factory” pad operations typically use low-viscosity slickwater fluids, which can leave a large volume of proppant in the casing if not properly managed. Poor flowback practices can result in even more sand being pulled from near-wellbore fractures. Milling out conventional fracture plugs and removing the plug debris takes time and has an associated cost, but it has the added benefit of cleaning out the excess sand that would otherwise hinder production. Thus, to maximize efficiency when using dissolvable technology, it is critical to plan and manage proppant. Technologies, such as PropNET proppant flowback control technology and AvantGuard advanced flowback services, can help mitigate sand dune effects seen in these wells.

As operator experience increases in the use of degradable technologies, many have found that their choice does not center on the question of conventional versus dissolvable fracture plugs, but rather how to combine them in optimized hybrid completions to maximize the efficiency, technical and economic benefits. A great example of this is an operator that develops wells in the Meramec Formation in Oklahoma.

The operator’s completion design generally calls for lateral lengths ranging from 2,286 m to 3,048 m (7,500 ft to 10,000 ft) and stage spacing of 46 m to 91 m (150 ft to 300 ft). Historically, the company has used traditional fracture plugs of various designs but recently began a transition to hybrid operations based on the longer milling times—and costs—associated with milling activities beyond 1,524 m (5,000 ft). For stages up to a 1,524-m threshold, which CT could reach easily, dissolvable technology economics were uncompetitive with conventional fracture plug and milling operations. Beyond that threshold, however, the CT premium for increasing depth and difficulty changed the economics. Building a simple model that incorporates the cost of the plugs and CT milling and cleanout operations, and based on a single premium on CT operations deeper than 1,524 m enabled the operator to determine the potential savings of a hybrid design rapidly.

For example, in a 3,048-m (10,000-ft) well with 46-m (150-ft) stage spacing, the engineers calculated that using degradable plugs in the last 1,524 m would save more than $22,000 as compared with using conventional fracture plugs for the whole well. Using a similar analytic approach, where individual well conditions are used to evaluate the cost of mechanical intervention, guidelines were developed for different well configurations and stage count.

As experience with hybrid completions continues to grow, the economic model increases robustness. As a next step, the model will account for the risk and economic impact of reducing other CT-related operational impacts, the benefits of faster time to market achieved by reduced CT time on location and the greater savings of longer laterals. These intangible benefits further exemplify the need for a proper economic analysis and a holistic approach to completions using degradable plugs. Depending on specific well conditions, the optimal economic approach might require simple modification to the pump down and flowback program as well as a number of plugs that can range from a full wellbore to hybrid completions.

Eliminate milling with a robust frac plug that isolates reliably and then dissolves rapidly to enable fullbore production.

Manage primary and remedial sand control costs with treatments that keep sand out of the well without screens.