Why we are the experts

Smith Bits leads the industry with record-crushing drillbit technologies proven and reproven in the field. What energizes the performance of these drill bits is our extensive library of field data from around the world, including the top-producing basins in North America, which helps identify the best cutting elements and configurations to perform best for any given application or basin. Field success drives ongoing design improvements for superior, solution-specific bits that fail rock quicker and more effectively, withstand impact and wear longer, and crush ROP standards by 50% per field or more, fueling vast industry acceptance worldwide.

Stratigraphy plays a large role in the Permian Basin’s prolific oil and gas production. Multiple hydrocarbon-rich units are strewn throughout the stratigraphic column, enabling multiple stacked producing zones. Within the Permian’s 115,000 mi2 are the Delaware, Midland, and Central Basins, each with their own, often unique, stratigraphic formations. Within those are various depositional environments. Most of the Upper Permian hydrocarbon reservoirs are in San Andres and Grayburg Formations. The clastics of the Brushy Canyon reservoir of the Delaware Basin also contain hydrocarbon reserves. The sedimentary section of the Permian comprises Paleozoic carbonates that accumulated on the shelf of the basin while siliciclastic and some carbonates accumulated on the slope. 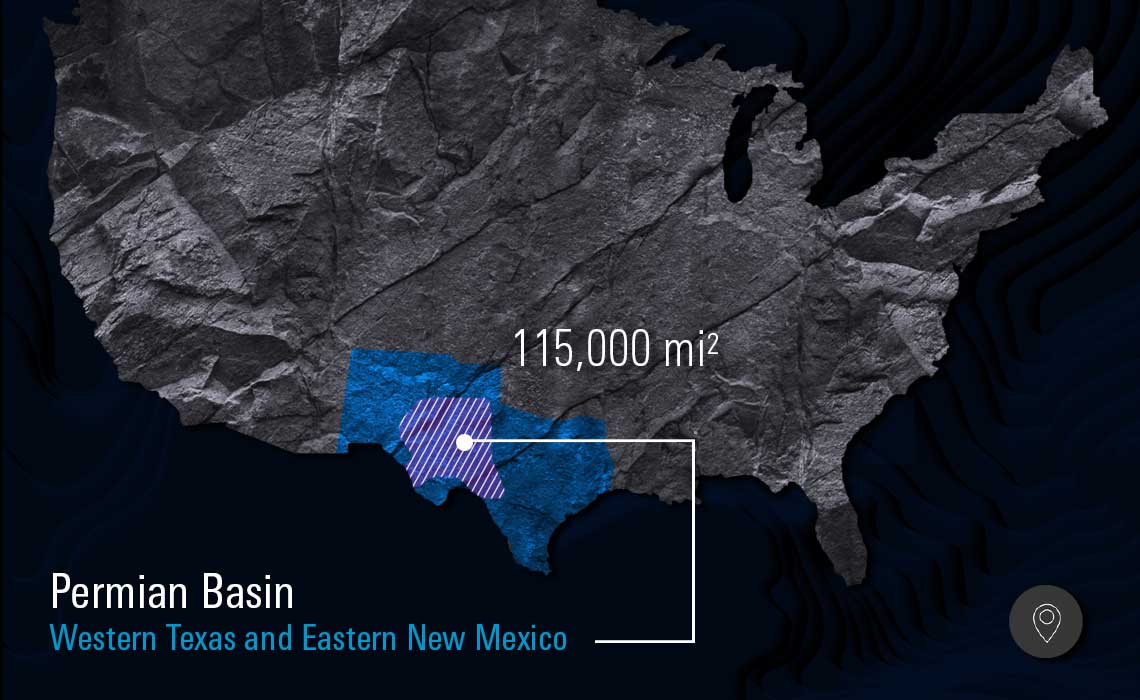 This cretaceous hydrocarbon-producing formation trends across Texas, roughly 50 mi wide and 400 mi long with a thickness that ranges from 50 to 400 ft in the Texas subsurface, below Austin Chalk and above Buda Limestone—4,000- to 12,000-ft depths.

Formations drilled in the surface section usually have a low abrasion and impact risk enabling operators to spud several wells with the same bit and reduce operational costs. However, one of the biggest challenges is the Wilcox Formation present in the drillout section. Its abrasive and interbedded layers force operators using conventional bits to reduce rpm and WOB. Additionally, curve sections often kick off right above the shale and are drilled with dogleg severities (DLS) ranging from 8° to 12°. 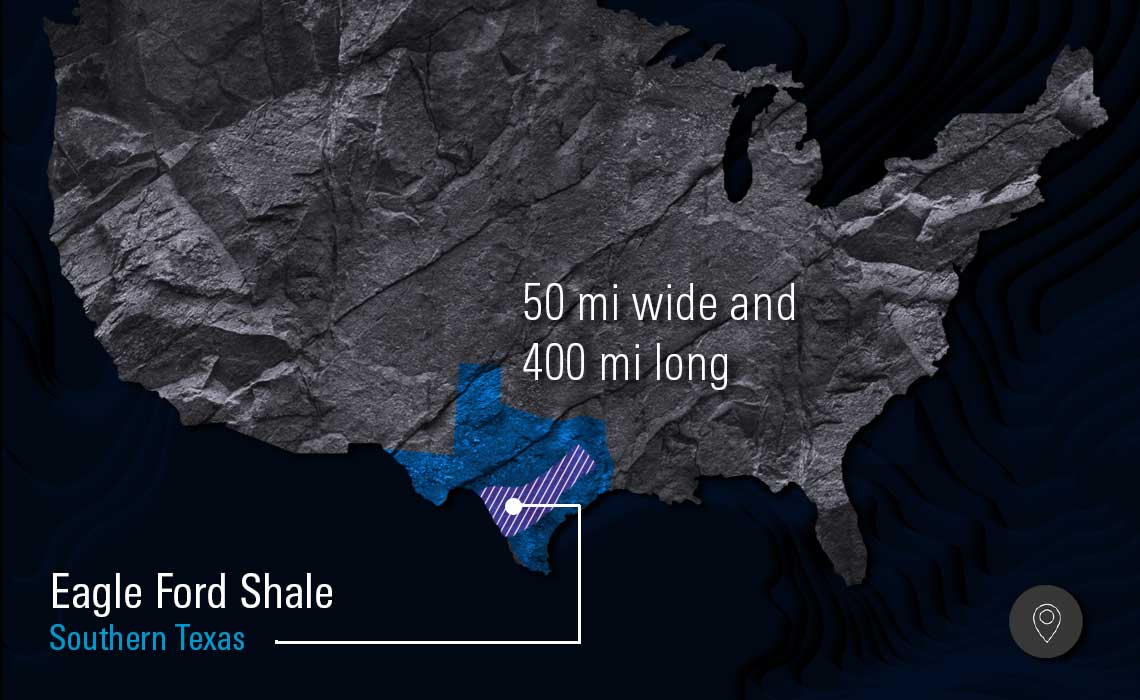 Stretching from New York down through Ohio, Pennsylvania, and into West Virginia, the Marcellus Shale comprises several layers of interbedded formations that lie between the surface and the production zone from 5,000- to 6,000-ft TVD. A typical surface interval down to 500 ft consists of a mixture of coal, siltstones, and shale with an unconfined compressive strength (UCS) up to 10,000 psi. Below this section is an intermediate interval down to nearly 2,000 ft, consisting of interbedded layers of sandstone, siltstone, and shale. The drillout section comprises soft shale with stringers of hard siltstone and, in some cases, sandstone stringers with up to 20,000-psi UCS. The production zone is reached by drilling an 8° to 12° DLS and a lateral section that is nearly all shale with occasional faults and limestone stringers. 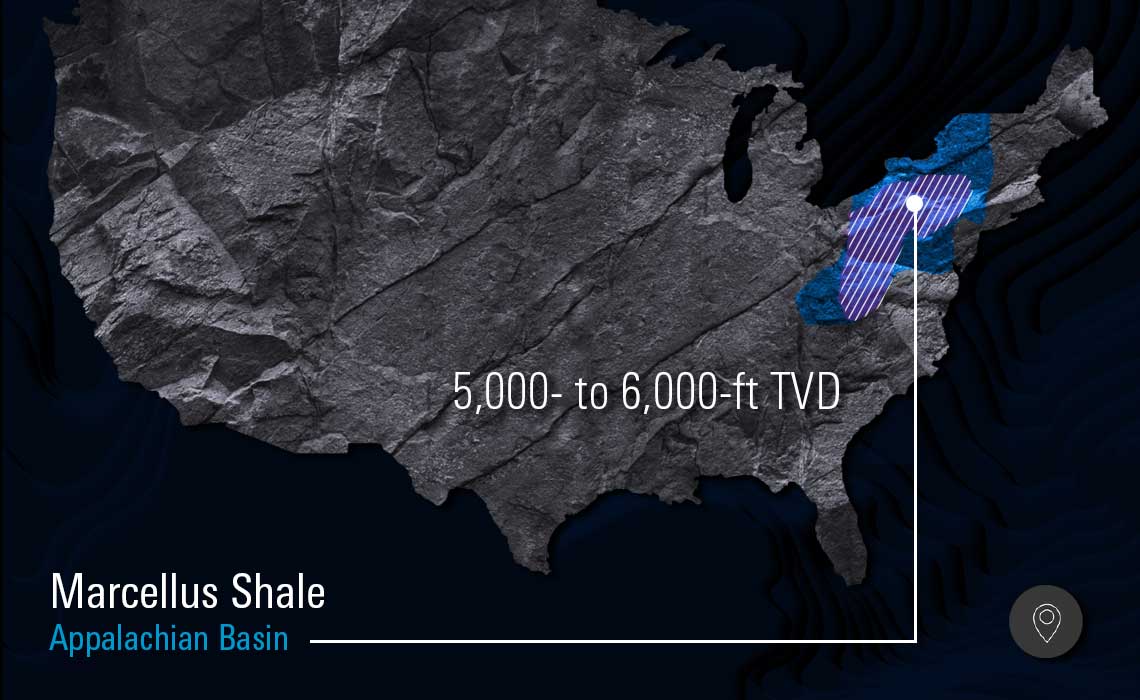 Located approximately 3,000 to 5,000 ft deeper than the Marcellus Shale, the Utica Shale play is a Middle Ordovician formation that stretches predominantly through Ohio and parts of Pennsylvania and West Virginia. Underneath the Onondaga Limestone lie extremely interbedded layers of dolomite, siltstone, and sandstone with the occasional presence of high compressive strength chert stringers, which pose a unique challenge when drilling intermediate sections. Transitioning from the vertical to the intermediate to the lateral section is 500 ft of ratty shale. The rest of the curve and lateral section, which contains low compressive-strength shale with occasional limestone stringers, is part of the Trenton Limestone and where compressive-strength increases. These heavily interbedded formations mean high potential for impact-related damages to drill bits, unless designed with this shale play in mind.Back to top. 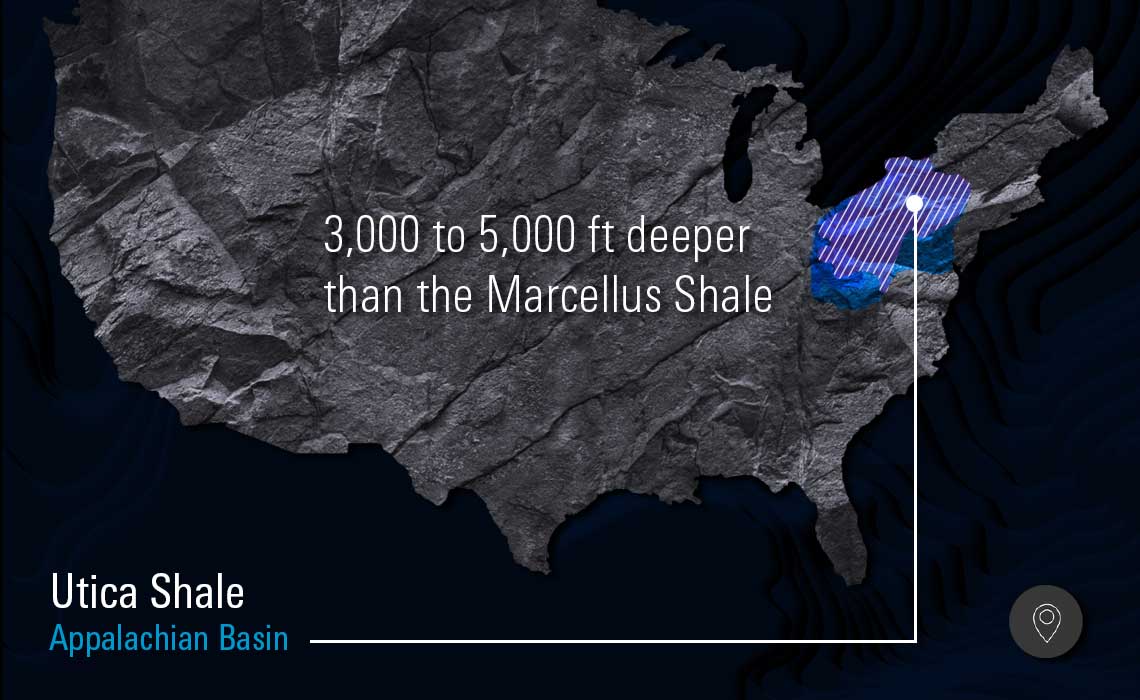 Among the drilling targets in the Niobrara and Codell Formations, the Niobrara Formation itself has three separate benches comprising separated shales of mainly chalk and marl. They are characterized as having laminar inhomogeneity, which changes depending on the bench. In addition to laminations, faults are encountered in both the Niobrara and Codell, and are numerous and severe in their throw, becoming more severe in the southwestern side of the basin. The Niobrara sits at about a 7,000-ft TVD and is capped by the Sharon Springs Member, which also serves as a source rock. Below the Niobrara C is the Fort Hays Formation limestone at 7,100-ft TVD, which is a hard cap of 20,000 psi and separates the Codell sandstone beneath. The Codell is a largely homogenous sandstone of 5,000- to 10,000-psi UCS. Due to the faulted nature of the DJ Basin, throws from the Codell can be problematic as they can result in unexpected Fort Hays contact, posing difficulties for drilling assemblies. Likewise, a large fault in the Niobrara A can result in Sharon Springs contact that risks hole stability. 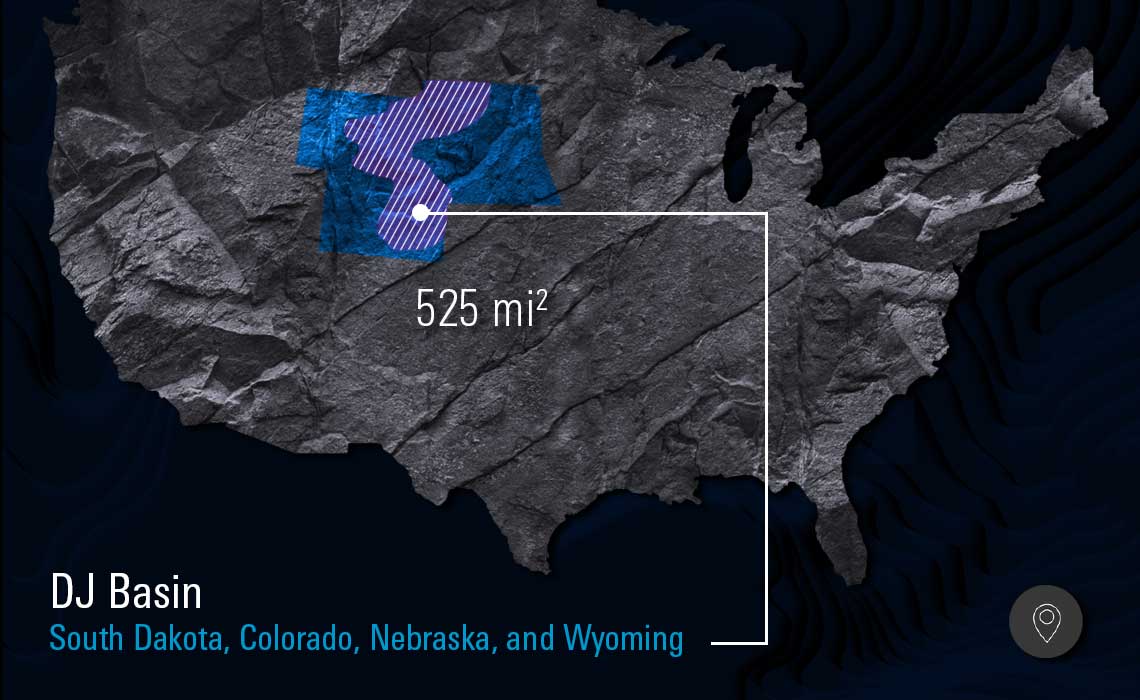 The Haynesville Shale Formation is an unconventional gas play crossing vast acreages in East Texas and Northwest Louisiana. The formation lies beneath the Bossier Shale and atop the Smackover Formations with TVD depths ranging from 10,500 to 12,500 ft, depending on the drilling field location. Reaching the Haynesville Shale is a challenge because of the Hosston, Travis Peak, and Cotton Valley Formations. These interbedded and abrasive formations can cause premature failure.

Drilling curve and lateral sections through the Haynesville requires water-based muds with weights that may vary, though often exceeding 15 lbm/galUS, potentially creating a plastic shale effect that destabilizes wellbores in the Haynesville Shale. 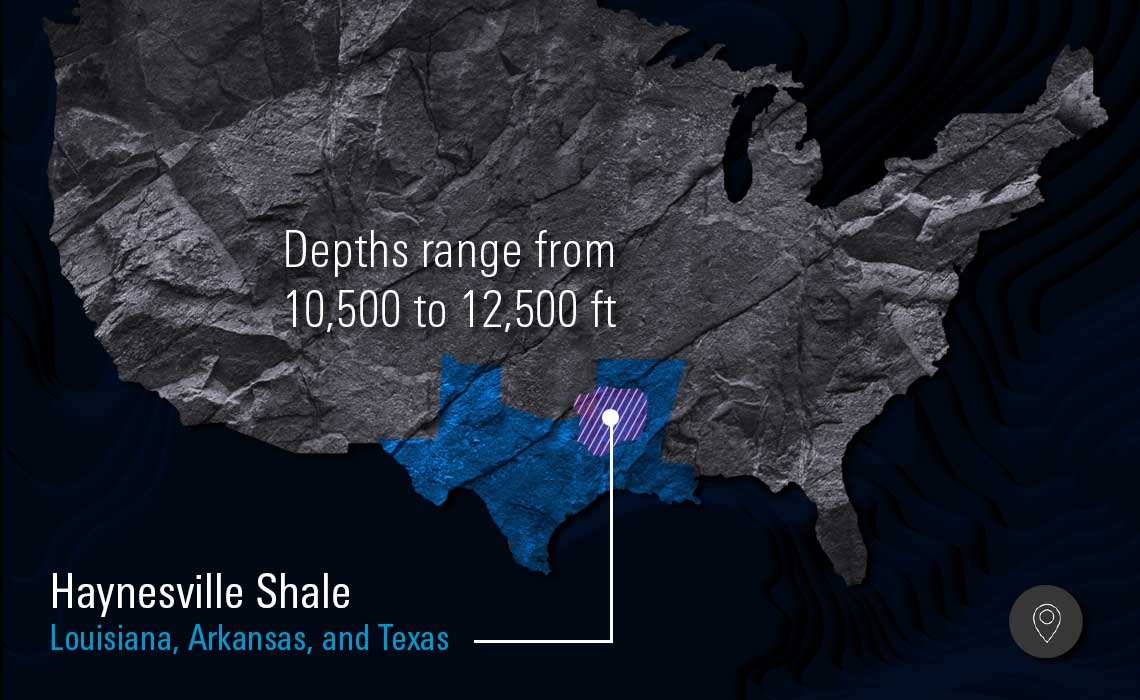 The Three Forks Formation sits below the Middle Bakken from 10,000- to 11,000-ft TVD. Fed by the Lower Bakken Shale, Three Forks is a mix of dolomite layered with mostly sand and clay, and there are laminations as thin as 1 in. Accessing these formations begins with upper sections of the vertical section through soft and sticky shales and sands comprised of the Pierre Shale and Mowry Formations, followed by the Dakota Formation, which is a mix of sands, shales, and salts. Below the Dakota is highly variable in compressive strength from below 5,000 to more than 30,000 psi, typically encountered in the transition into the Piper Limestone and in the very difficult Minnelusa Group. These punishing transitions finally subside below the Kibbey Formation limestone cap, where salt and anhydrite content increase. The final section is drilled through hard limestone known as the Mission Canyon and Lodgepole Formations, notoriously difficult to drill because of their consistent 20,000 UCS. 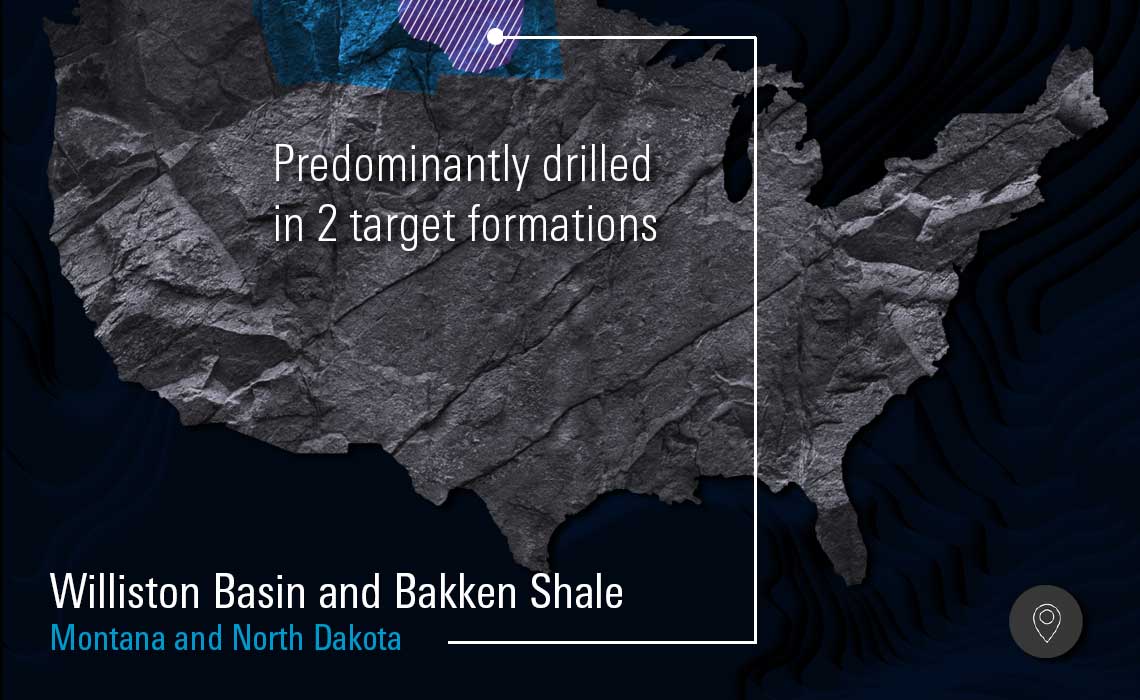 The Anadarko-Woodford Shale play was first drilled in 2005. This play offers about 1,300 bbl/d, as well as 47 Mcf natural gas. And it is expected that the Anadarko-Woodford play has approximately 22.2 Tcf of recoverable gas. There are nearly 900 wells across the play, and the rig count has remained consistent over the last few years. Consisting of a soft shale base, the formation is unique, containing significant chert and chert-like silica deposits. It challenges drillers with pyrite throughout the play. This combination is extremely destructive to drillbit technologies. Drillbit cutters are subject to impact, wear, and heat that reduces bit effectiveness and lead to higher well construction costs. The formation requires bits and cutting elements with improved durability to maintain ROP and footage. 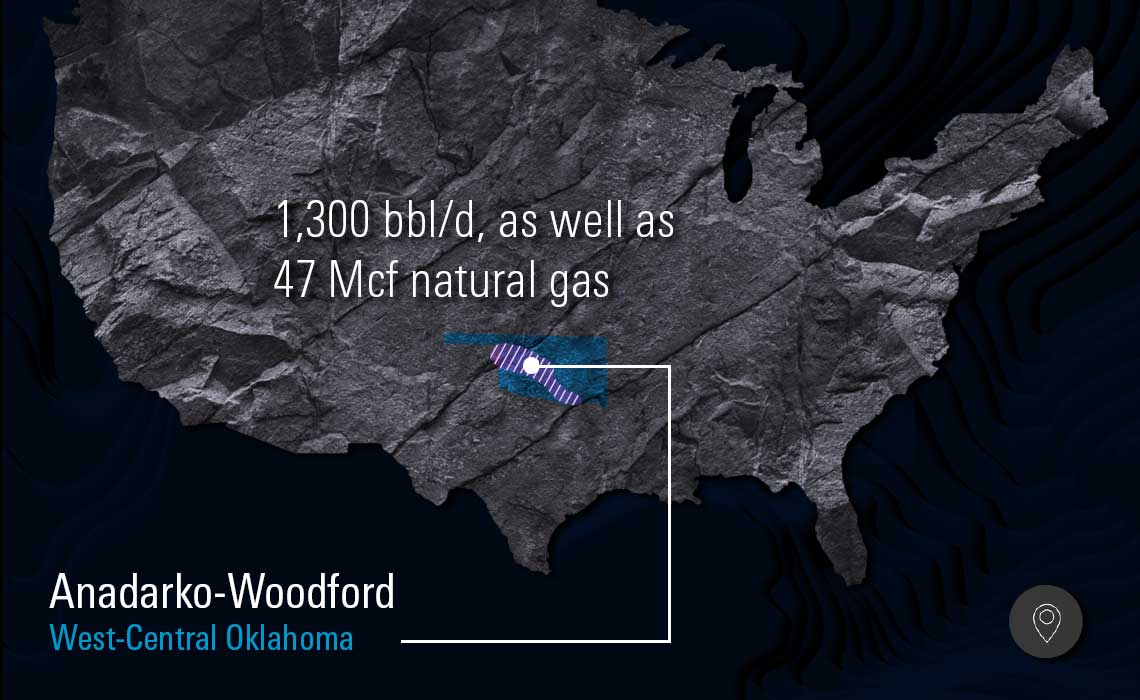 With a rich area of mineral deposits, the panhandle area of Oklahoma and Texas makes a great drilling region for natural gas and crude oil. There are formations at approximately 11,000 to 15,000 ft in the Granite Wash play, producing about 27 MMcf of natural gas and nearly 3,200 bbl/d of oil. This is also a newer play, meaning that production is expected to increase over time.

The Granite Wash is made of the eroded remains of many types of formations, resulting in a very diverse “wash” of lithologies. These unique rock characteristics and properties create a multitude of challenging drilling environments, ranging from high quartz and chert content, resulting in low ROP, to relatively softer and increased shale content, enabling faster ROP. Throughout the range of zones, the formation typically exhibits a moderate to high abrasive nature. Drillers in this play seek a drill bit with cutters that endure such conditions to increase footage drilled, sustain higher ROP, and lower overall drilling costs.Back to top. 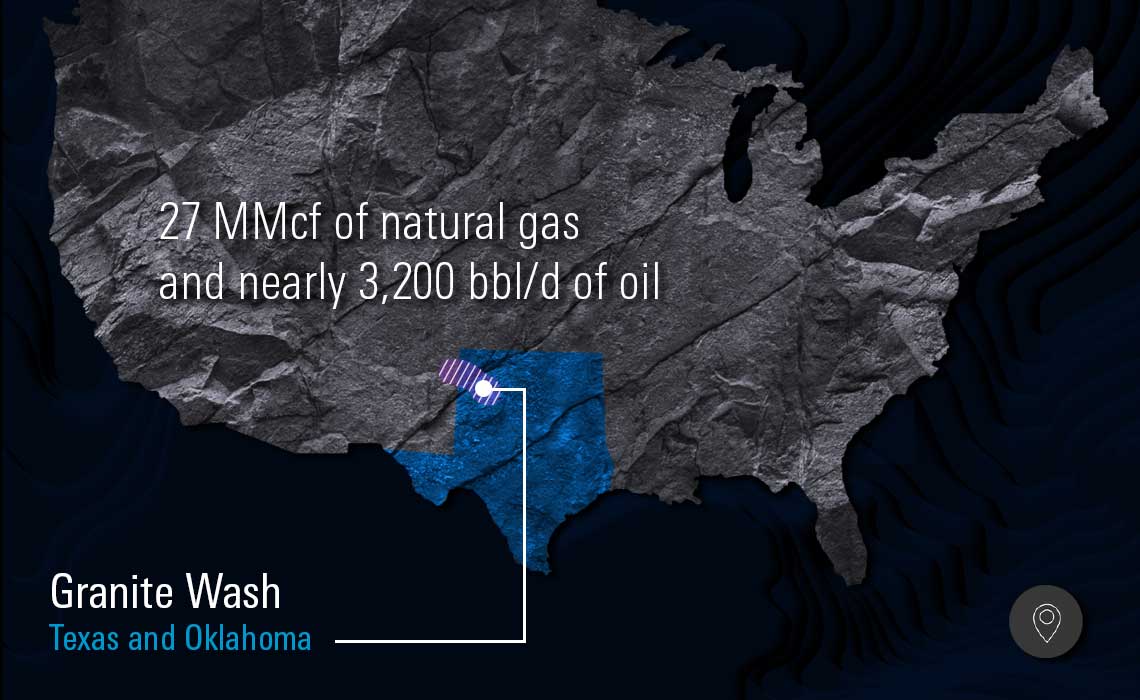