As with any major development, success hinges on close and continuous collaboration between all parties involved. Chevron’s Jack/St. Malo prospect is no exception. This ongoing deepwater frontier development in the Gulf of Mexico began following discovery of the two fields in 2003–2004. With such a major project, Chevron elected to benefit from the ‘chain of accountability’ for mission-critical services, whereby responsibility for key, linked services was assigned to a single provider.

For Chevron, collaborating with Schlumberger to develop several of these service solutions was a natural choice based on the companies’ shared positive experience developing the Tahiti prospect in 2004. Learnings from the Tahiti prospect proved invaluable as it set the record for water depth for a producing well.

The decision to collaborate had dual benefits: first, communication between Schlumberger and Chevron was greatly facilitated by all parties having a common purpose—working with Chevron to construct wells in challenging geology and land them precisely in reservoir sweet spots. Second, technical expertise was available to all participants up and down the chain of operations. The learning experienced for operational planning and implementation teams was seamless, resulting in major efficiencies as the project proceeded. Close collaboration ensured that data required for life-of-reservoir decisions was acquired at the most opportune time.

To illustrate, flow assurance, which is typically a completions concern, requires field designers to know precisely where the asphaltenes threshold will be reached. The information required to make this calculation is provided by sophisticated logging tools run many months earlier in the development process. Coordination between the information providers and data users fast-tracked resolution of this critical task.

The Jack/St. Malo prospect presented numerous technical challenges in terms of water depth that ranged from 2,100 ft (640 m) to more than 7,000 ft (2,134 m). Reservoir targets were estimated at more than 20,000 ft (6,096 m) beneath the seabed. They were characterized as low permeability, 30,000-psi ultra-high pressure reservoirs that would require a full portfolio of suitable and reliable technologies to enable Chevron to assess the reservoirs’ economic potential toward reaching production goals of 94,000 b/d of oil and 21 MMcf/d of natural gas in the coming years.

Chevron’s planners were already applying their foreknowledge based upon seismic surveys and other exploration techniques to build dynamic models. These could be easily updated as additional information became available. The early models were promising; nevertheless, each new bit of information helped to clarify and improve Chevron’s ability to estimate costs and profits. 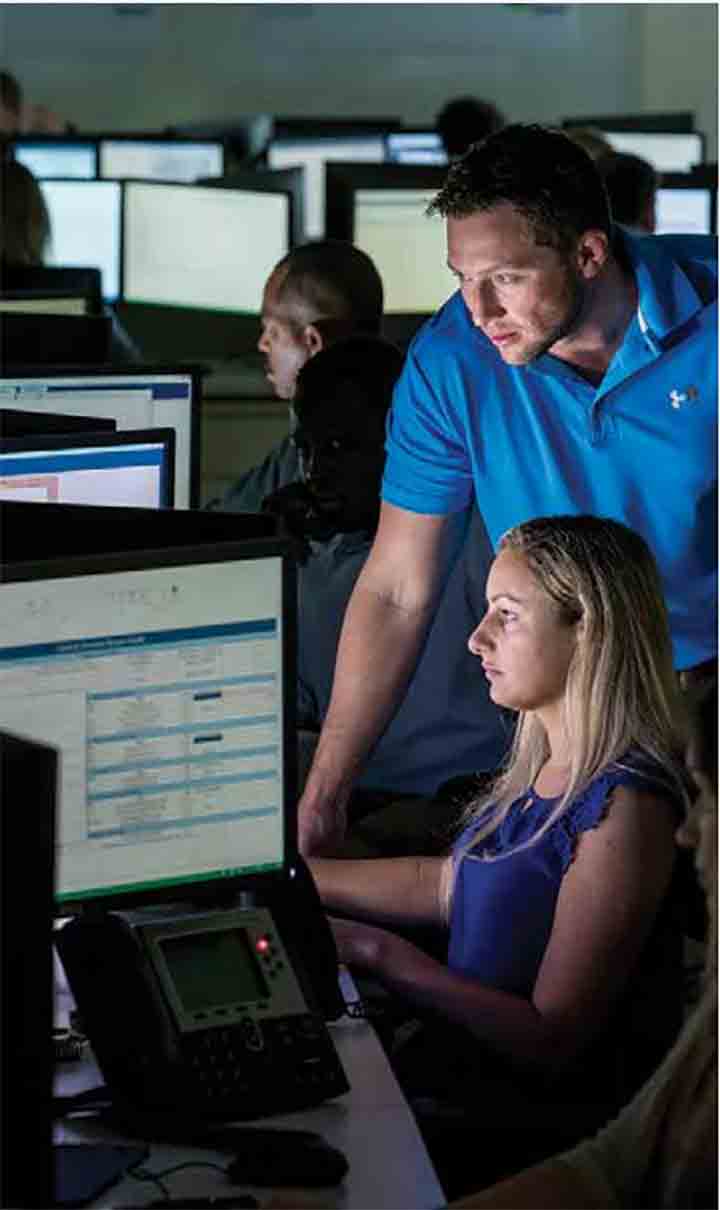 A collaborative environment between Chevron and Schlumberger teams enables optimal data integration and management throughout operations at Jack/St. Malo.

In 2006 Chevron commissioned a 3D seismic survey conducted with the Q-Marine point-receiver marine seismic system to image the St. Malo reservoir. Information from this survey enabled Chevron to high-grade initial reservoir models and optimize early appraisal and development targets. The positive results of this survey led Chevron to sponsor a multiclient wide-azimuth (WAZ) project in 2008. The new survey provided better illumination under complex salt bodies and improved structural definition. During 2011 and 2012, Chevron employed a combination of Chevron and WesternGeco imaging technologies to improve the seismic imaging, which then served as the foundation for a collaborative uncertainty analysis study that integrated Chevron’s knowledge of the Earth Model with the WesternGeco WAZ data. Results from the study were integrated into Chevron’s static model for St. Malo reservoir management and used for scenario testing and risk mitigation.

The Jack/St. Malo project benefited from application of the industry’s technology advancements. Drilling tools and techniques, drilling fluid development, and logging and well-testing technology were all evolving rapidly at this time to deliver higher efficiency, more precise information, and greater safety.

For drilling at Jack/St. Malo, the PowerDrive Orbit rotary steerable system (RSS) efficiently drilled up to 8,000 ft (2,439 m) of complex, salt, shale and abrasive sandstone strata that would have greatly affected the run-life of previous-generation equipment. The highly reliable push-the-bit pad actuation of the PowerDrive Orbit RSS utilizes metal-to-metal seals for enhanced drilling performance, efficiency, and trajectory control, even when high shock and vibration and other harsh drilling conditions are present.

The system enabled accurately steering through the overlying strata to hit reservoir targets and to achieve Chevron’s ambitious development plan while reducing shock and vibration issues that are anathema for bottomhole assemblies. The drilling system delivered an unprecedented 24% improvement in salt penetration rates, and 208% improvement in the sediment.

One application where innovation directly addressed Chevron’s concerns was underreaming while drilling. Previously numerous trips were required to achieve desired hole diameter, with the costs not in line with the marginal value. Because the Rhino XC on-demand hydraulically actuated reamer can be quickly adjusted via flow activation, 48 hours of trip time was saved.

Compared with earlier St. Malo wells, Chevron saved 15.9 days of deepwater drilling vessel time, which is equivalent to a 55% drop in estimated costs and savings of more than USD 14 million.

Continuous measurements transmitted in real time while drilling enabled M-I SWACO, a Schlumberger company, to customize its drilling and completion fluids as needed. Chevron drilling engineers worked with Schlumberger fluids experts to model each section to minimize equivalent circulating density (ECD) and reduce lost returns. Conventional fluid systems were compared with M-I SWACO’s WARP advanced fluids technology. This micronized-barite drilling fluid was selected in consideration of its ability to maintain ECD within a narrow band, with a subsequently reduction in overall fluid losses to 144 bbl.

Workflows were developed to efficiently acquire and analyze the data needed to address Chevron’s immediate concerns, but Schlumberger understood that more insight would be required as development progressed. Perhaps the most valuable information was derived from measurements acquired with the MDT modular formation dynamics tester equipped with Quicksilver Probe focused fluid extraction and the InSitu Fluid Analyzer real-time downhole fluid analysis (DFA) system because it enabled real-time decision making by Chevron engineers. The previously mentioned asphaltenes threshold is but one of the critical parameters revealed by DFA conducted with specialized sensors on the fluid at reservoir conditions.

As its name implies, Quicksilver Probe extraction speeds the acquisition of uncontaminated formation fluid. In addition to the real-time insights provided by DFA, fluid samples can be retrieved for laboratory analysis. Both the shorter station time for Quicksilver Probe extraction and the critical reservoir information obtained enable reducing the risk of sticking to save valuable rig time. Where closely spaced fluid samples are not required, the MDT tester is augmented with PressureXpress reservoir pressure while logging service to determine pressure gradients that identify gas/oil and oil/water contacts, which is vital knowledge for completions specialists and reservoir engineers. 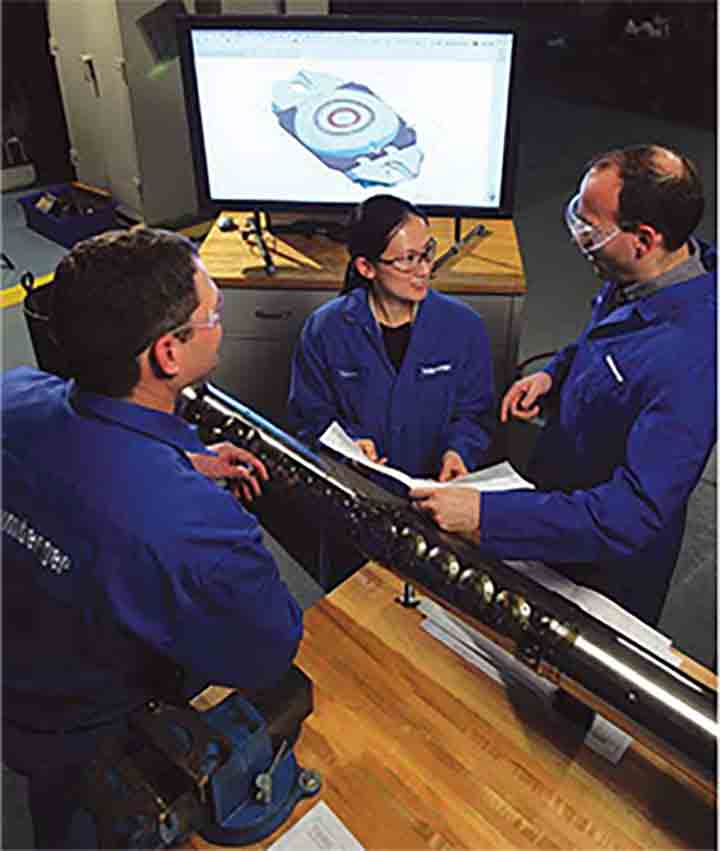 Engineers discuss the Quicksilver Probe focused extraction which drains off contaminated filtrate from the outer ring while sampling uncontaminated formation fluid from the center port.

Recognized by petroleum engineers as the “gold standard” of reservoir data, the final step in the well evaluation is the well test, a temporary completion of the well achieved by a string of downhole test tools. Pressure transients, measured by precise downhole gauges, are used by reservoir engineers to calculate reservoir volume and connectivity and place boundaries. These data give critical input to Chevron’s 3D reservoir model for economic decisions.

Well testing at Jack/St. Malo determined that commercial production rates were indeed achievable and, in the process, set a world record for well test depth at more than 28,000 ft (8,537 m).

The development of Jack/St. Malo remains on target due to the continuous collaboration between Chevron and Schlumberger. As the program continues, knowledge of the reservoir—from data integration and management by Chevron experts in the 3D dynamic reservoir model—will benefit future decisions as well as provide backbone information for completion and production engineers, extending all the way to final abandonment.

Perhaps the ultimate achievement is that the development of the Jack/St. Malo blueprint will guide geoscientists and engineers as they tackle future challenges.

Improve safety, efficiency, reliability, and sticking avoidance with a conveyance solution for every well environment.

Collect virtually contamination-free fluid in a fraction of the time.