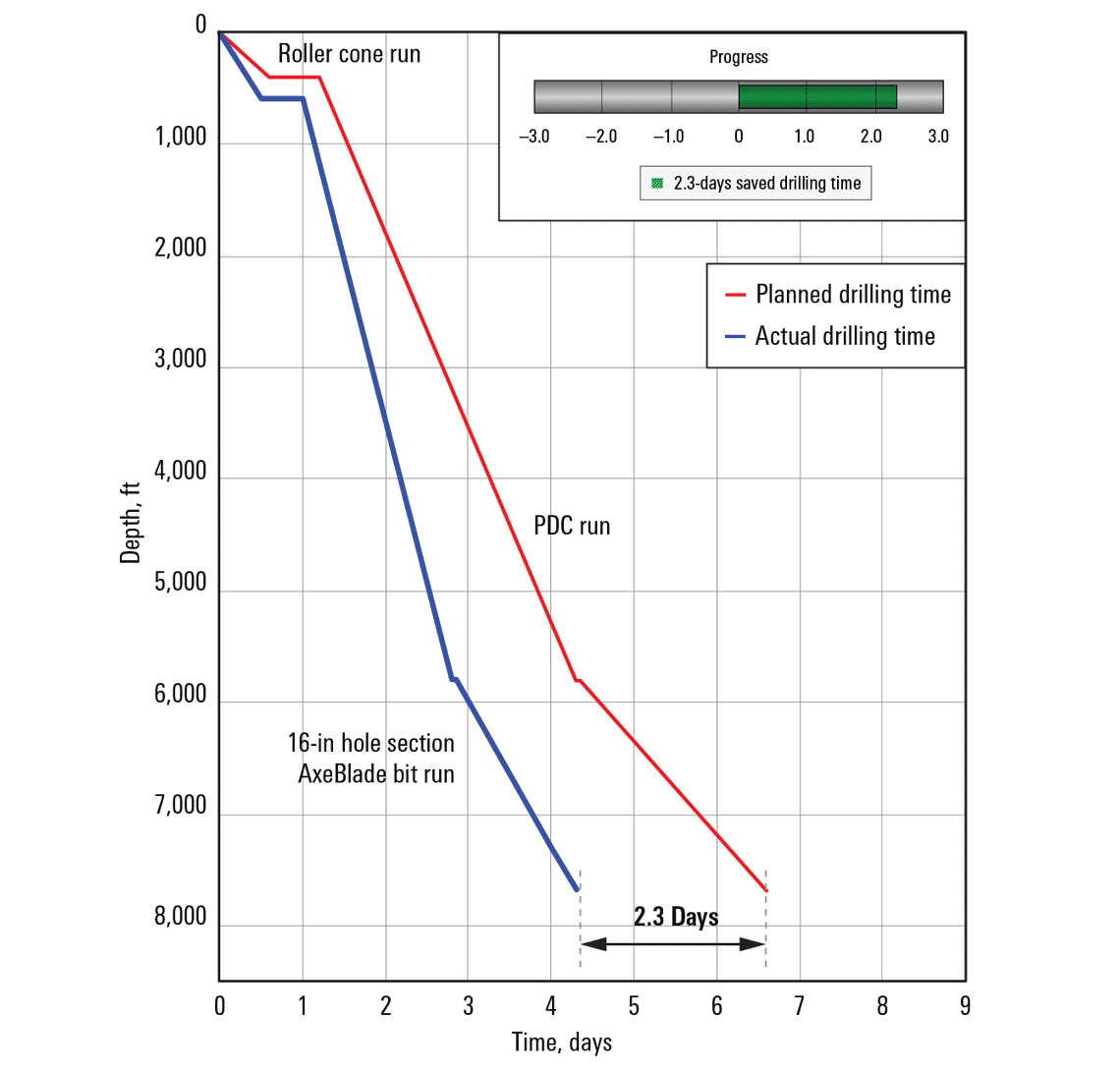 Incorporating Stinger elements and FireStorm technology, the unique design of the AxeBlade bit enabled drilling the challenging section in a single run with minimal bit damage.

Empresa Nacional del Petróleo (ENAP) needed to drill a 16-in section of a J-profile well through the Tiyuyacu Formation in Mauro Davalos Cordero (MDC) Field. Interbedded claystone, sandstone, and conglomerates are common and pose a high risk of impact damage and poor dynamic behavior. The hard and abrasive sandstone and conglomerates had an unconfined compressive strength of 12,000 to 15,000 psi [82.74 to 103 MPa], with peaks up to 20,000 psi [137.89 MPa].

Use a specially designed Blade bit

Engineers from Smith Bits, a Schlumberger company, developed a new bit configuration that could withstand sudden impacts, while increasing the point of contact with the borehole wall to improve stability and steerability. Starting with an AxeBlade ridged diamond element bit, they determined that strategically placed Stinger conical diamond elements and FireStorm wear-resistant high-impact PDC cutter technology would be able to withstand harsher conditions and drill more aggressively versus standard PDC cutters. The IDEAS integrated dynamic design and analysis platform predicted that using the stabilization pads concept associated with the unique cutting structure layout delivered smoother dynamic behavior with lower levels of shock, enhanced toolface control, and improved cutting structure aggressiveness in the form of a bullet-body design. This innovation featured taller blades and a higher number of nozzles (9) to avoid bit balling in the sticky claystone layers of the Chalcana Formation.

Saved 2.3 drilling days and completed section in a single run

The new hybrid Blade bit proved to have a robust cutting structure that drilled the challenging 16-in section in a single run and demonstrated significant potential for overall performance improvements. The ENAP drilling team used this bit and drilled at 40–80 rpm with a WOB from 20,000 to 40,000 lbf [27,100 to 54,200 N.m].

When pulled out of hole, the new bit showed a dull grade of 0-1-WT-S-X-I-CT-TD after consistent performance.